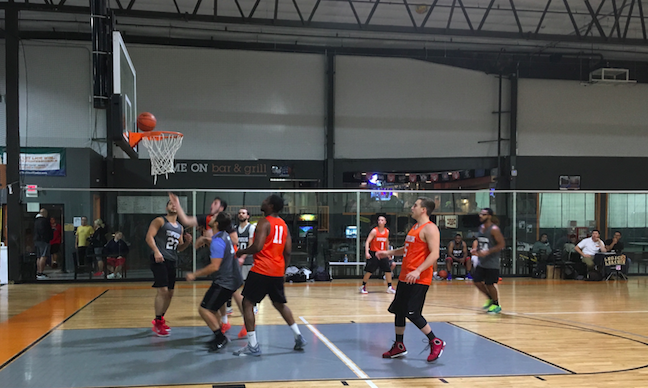 With the season winding down, we were treated with a matchup of two of the strongest teams in the league during week eight. Sportslook and the Temptations entered play both with a record of 5-2 and are fighting for a bye in the playoffs. Despite a double-digit lead in the first half, the Temptations would end up losing by double-digits themselves, 70-58.

Carmine Santorelli came out of the gates firing and Sportslook could not stop them despite how much they tried. He would make four out of his of his five 3-pointers in the first quarter and was simply on another level.

“He’s one of the best players in the league by far,” Sportslook’s Nick Bacarella said. “Not saying they don’t have other players, but he’s definitely their best.”

Despite the hot start in the first half, Sportslook got back to playing their caliber of defense and were able to steady the ship in the second half. Eric Green was dominant in the paint defensively and managed to collect 15 rebounds. As Sportslook’s defense tightened, so did the score.

“I mean, it shows the type of team we are,” Bacarella said. “Just keep our head. Do what we do and our defense helps us out.”

Bryan Acevedo saw his shooting slump come to an end drilling five of his nine attempts from behind the arc. He would finish the night with 35 points shooting at 62 percent from the field. Bacarella would join him in double digits with 11 points and three rebounds.

As Acevedo began to heat up, Santorelli saw himself cool down. Hampered by double teams and limited time with the ball, he struggled to provide contributions offensively after Sportslook made its defensive adjustments. Santorelli ended the night, adding to his MVP-caliber season, with 26 points in addition to five rebounds and four steals. Erik Silva and Fred Milfort continued to provide strong supporting performances as they would finish with 16 and 14 points respectively.