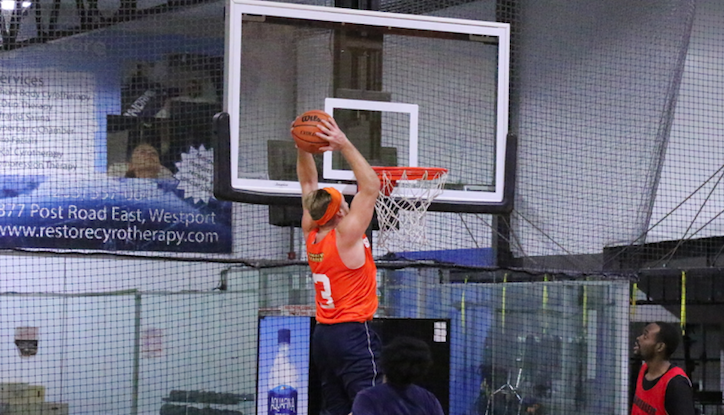 Defense and fouls were a theme in the Sportslook and Rim Breakers matchup Monday night. Sportslook eventually came away with the win 56-41 after a chippy back-and-forth contest. The game got off to a very slow start with both teams failing to reach a double-digit combined score until three minutes remaining in the first quarter.

The game then heated up and Sportslook took the lead after the first quarter, 13-6.

With both teams racking up fouls early on, the sides had to resort to a less aggressive style of defense. Sportslook did an excellent job of using the whole court and creating good scoring opportunities.

“The fundamentals worked well for us tonight,” Sportslook’s Jeff Norko said. “We moved the ball around, we took open shots, and we made open shots finally.”

Norko led the team with 14 points along with Dan Kokkoros and Tyrell Holmes both scoring 12 and 10 points, respectively.

“Tyrell Holmes was a big addition today,” Norko said. “We really needed him. The depth was huge. If you only have four or five guys, it’s not going to cut it in this league.”

But the defense of Sportslook proved to be too tough and Sportslook came away with the win.