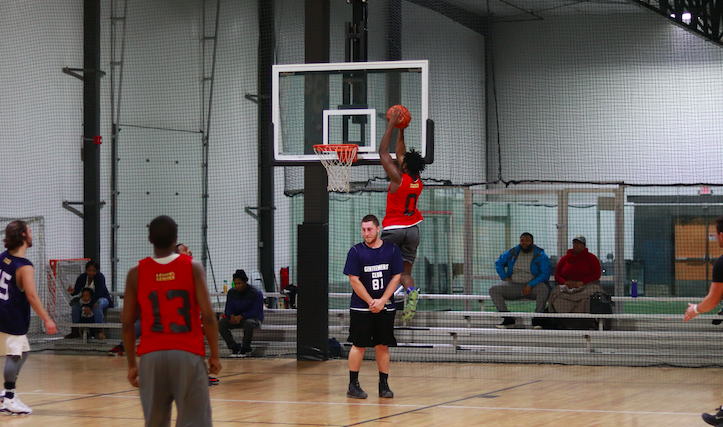 The Rim Breakers got out to a blazing hot start Monday night against the Gentlemen’s Club, outscoring their opponent 22-8 in the first quarter and eventually winning 96-41. The Rim Breakers put on an offensive display of highlight reel dunks along with great passing sharp shooting.

Along with the offensive frenzy, the Rim Breakers also put on a display of stellar defense, causing 16 total turnovers for the Gentlemen’s Club.

“Defense man, defense and running the ball” said Rim Breaker’s Carl Fairfax. “Our bigs are mobile and that’s what works well for us”.

The Rim Breakers seemed to play with a chip on their shoulder, coming off of a tough Week 1 loss to the Flint Tropics coupled with their season ending a year ago by a buzzer-beater in the semi-final game.

“Winning, just winning. The past few years, we feel like we should have won it but we didn’t pull through”, said Fairfax.

The Rim Breakers are poised for a very strong season having shown their offensive fire power and how well they work together as a team.

Having six players score in the double digits for their team is the main reason why they were able to blow out the Gentlemen’s Club. It speaks to how good their team chemistry is and how effectively they move the ball up and down the court.

Going into next week, the Rim Breakers are looking to take the positives from this game into their next week’s matchup.

“(We need to) stay strong on defense because as you can see, we run up the scoreboard when we do that.”