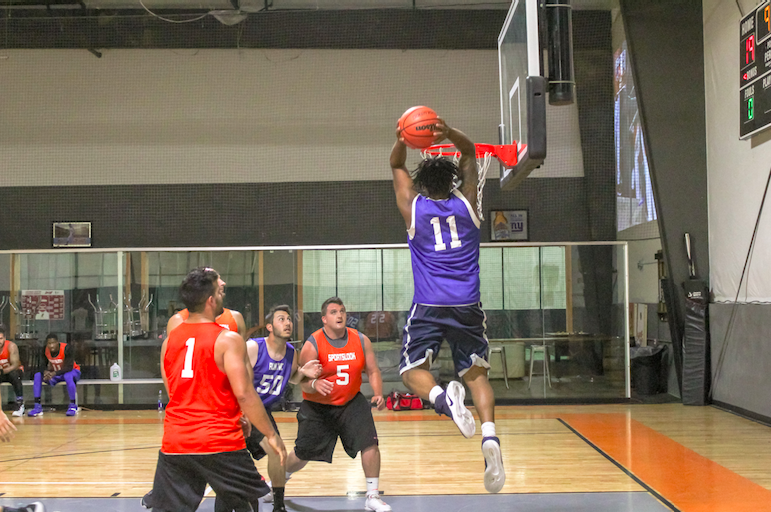 Run TMC took care of business against Sportslook defeating them 69-56 to go to 5-1 on the season. With the loss, Sportslook drops to 2-4 on the year.

This game could have been a trap game for Run TMC if they were looking ahead to next week against Team Moose but they really battled in a sluggish game and came out on top to get the win.

Run TMC used a 20-7 third quarter rally to break the game open and have proven themselves as a scary team when they get rolling like they did Monday night in the third quarter.

Reggie Stewart and Eric Singleton dropped 24 and 14 respectively and this duo has to be considered the best in this league as they are constantly putting up big numbers week-in and week-out. Those are the two key guys that every team attempts to stop or even slow down on a week-to-week basis.

Sportslook finally had more than four players and for a while were making things interesting. Tyrell Holmes led the way with 25 points and Dan Kokkoros had a double double adding 17 and 10. A big issue was Sportslook shooting in this game.

They shot a brutal 2-19 from threes and thats not going to win many ball games. With that being said, this should not discourage Sportslook because they really were in the game for awhile. They look to build off this against Nothing Easy next week.

After coming off a tough loss last week, Run TMC made sure to not let that affect this week.

“Last game we were not full strength,” said big man Kayjuan Bynum. “We regrouped, and got back to what we know.”