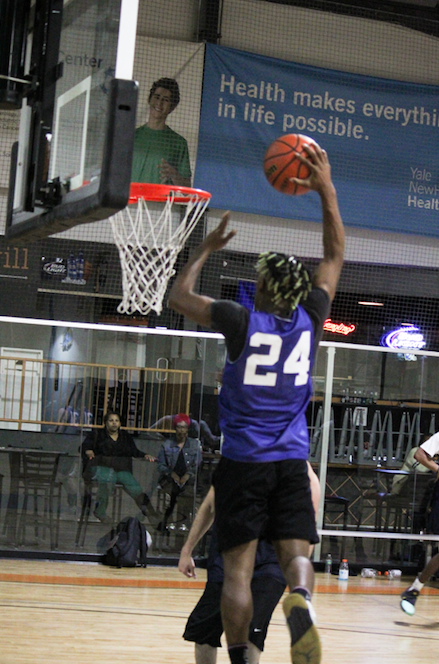 In a game filled with lots of intensity and late-game fireworks, Run TMC edged out the Blue Devils, 62-50, to begin the Summer 18 season. Run TMC, expected to contend for a championship after taking the previous season off, put on a nice performance against the respected Blue Devils by showing all the different play-makers that they have.  Run TMC showed its a team that numerous players can take over the game at any time. In this one, it was  Reggie Stewart who led the charge with 26 points and nine boards.

The Blue Devils, who lost in the Winter 18 championship, just simply could not go on a must-needed run to win this game or get defensive stops in crunch time. They were led by All-star Matt Marconi with 15 points and six boards. Second-chance points were also a big dagger in this one, with the Blue Devils getting manhandled on the boards, 30-14. In a scrappy game like this one, every second chance was greatly needed.

The key for Run TMC, according to Stewart, was getting back and playing help defense.

“We knew they can’t keep up so we wanted to get it and go,” he said. “My goal was to get everybody involved and hit the open guys.”

The fast-paced tempo was clearly established early from Run TM.After every rebounded they looked for the outlet pass to the guy closest to half court, pushing the pace. Their gameplan worked effectively, running the Blue Devils out of gas en route to their first victory of the season. It was a highly-intense game, setting the tone early in the season. The two teams won’t meet again unless they square off in the postseason in August.

The Blue Devils (0-1) will look to get back on track against Nothing Easy next week, while Run TMC (1-0) will try to remain unbeaten against Dinners Served.