Stewart’s 41 not enough to keep “Run” going, No Limit advances to Finals 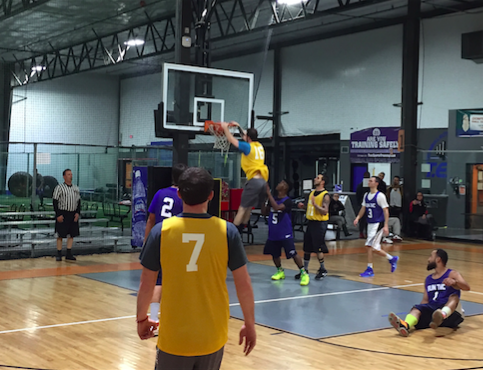 Run TMC came out of the gates blazing, and it began to seem like it would be a repeat from week seven when they snagged a win against No Limit, but Ronte Byrd and the rest of the No Limit squad battled until the end in a close 73-72 victory to advance to the Finals.

Reggie Stewart had no plans of ruining Run TMC’s eight game winning streak coming into a competitive match with the number two-seed No Limit. During the first half, Stewart ran the fast break to his advantage as the rest of the team would haul in the rebounds and dish the ball down court to Stewart to finish under the rim.

During the second quarter, Run TMC’s lead got up to double digits, giving them confidence for the rest of the game, but No Limit did not let up and came within five points going into halftime.

“We’ll let him (Reggie Stewart) get 50 points, but we need to make sure we stop everybody else on Run TMC,” Ronte Byrd said. “We need our big three to step up a little bit more, but we need to play both sides of the basketball.”

The first half of the game resembled the same scenario as week seven, when each player from No Limit tried to win the game single-handedly by jacking up ridiculous shots from behind the arc. After halftime, No Limit changed up their playing style and played more as a team.

Byrd came into the half igniting the team with two clutch three-pointers that brought No Limit within one point of the lead. As the number two-seed acquired the lead in the third quarter, Matt Zocco brought Run TMC back into the game by hitting two high-arcing three’s within seconds of each other, but it did not ultimately pay off.

After two clutch free throws from Stewart to tie the game at 72, Tarell Vargas split a pair of free throws on the other end with under five seconds left to give his team only a one-point lead. Kevin Blake had a chance to win the game on his team’s final possession, but a ten foot floater over a defender clanked of the rim, and No Limit escaped.

Both Vargas and John Rullan scored 23 points, and were able to rally the No Limit squad to the Finals. Stewart ended his season scoring a season-high 41 points.

No Limit moves onto the Legacy Leagues Finals against the defending champions, The Brotherhood. If the ‘three-headed monster’ and the rest of No Limit want to ruin The Brotherhood’s unbeaten streak, then they need lock down Russ Payton and Michael Davis, while also hitting a good chunk of outside shots in order to have somewhat of a chance.