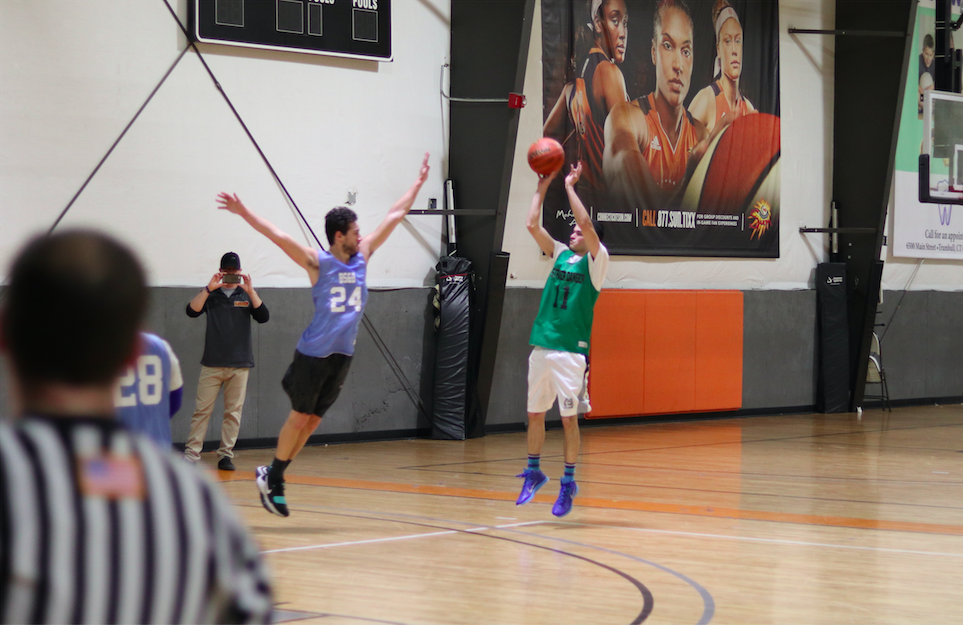 Stranger Danger (1-1) defeated Blood, Sweat & Beers (0-2) 57-51 thanks to the effort and leadership of Zocco, who finished with 25 points and six rebounds. After a slow first-half, he turned it on after halftime.

“I was on the bench in the 3rd quarter, and I wasn’t thrilled with the shots”, Zocco said. “I threw a couple up and they went in.”

Forcing 16 turnovers and outrebounding Blood, Sweat & Beers mainly in the first half, Stranger Danger rode to their first win. They got a lead in the 3rd quarter and really didn’t look back.

“It’s so important in this league to get a lead in the 3rd because the 4th quarter, you don’t want to be having to foul,” Zocco said. “It’s then a free throw shooting contest.”

Blood, Sweat & Beers were in the game up until late in the 4th quarter and turned into a free throw shooting contest, as the commissioner mentioned it would turn into. Cody Dileonardo and Robo Prayer finished with 13 and 11 points, respectively, continuing to post solid numbers. Pushing the floor and the second chance points are key to get Blood, Sweat & Beers their first win of the season next week against the Rim Breakers (2-0).

Joey’s brother Matt Zocco also finished in double-digits for Stranger Danger with 11 points and was one rebound shy of a double-double. Tyler Feldman converted on his first-ever free throw attempts in the Legacy Leagues for his only point of the night, but also added a handful of blocks beneath the rim.

Stranger Danger gets a matchup with Team Moose (0-2) next Tuesday as they look to keep the team morale up and move into the plus side of .500.

“Next week will be fun, this week was awesome,” Joey Zocco said. “I think it’s a good team win and hopefully we can build on it and make it two in a row.: