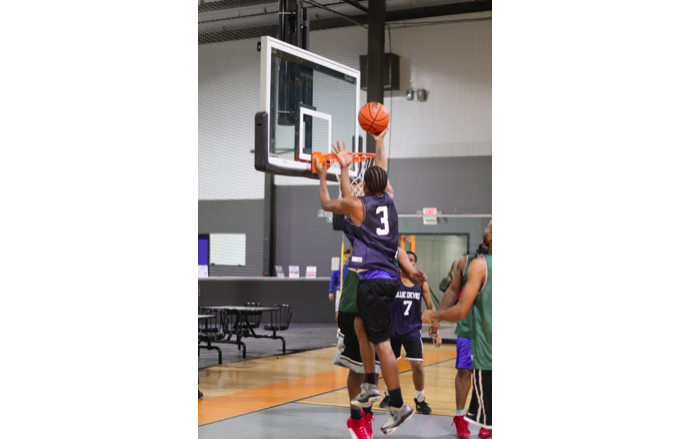 Arguably the best player to ever grace a Legacy Leagues court, Mike Davis of the Blue Devils provides buckets for his team in clutch moments game after game. Davis thrives in some of the most critical situations and his will to win is evident.

His game speaks for itself and his league hardware does the verification. Since entering the league Davis has won the Most Valuable Player award along with a Defensive and Offensive Player of the Year award.

When Davis was an infant he knew he wanted to play the game of basketball.

“Basketball has been something I wanted to do since before I could walk,” Davis said. 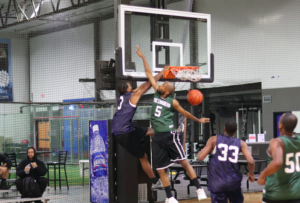 The Blue Devils Mike Davis slams home a dunk in his team’s Week 3 win over the previously undefeated Chasers.

An urban city talent from Bridgeport, Connecticut, he was determined to get his shot to be the best. Davis attended Harding High School and played on the varsity team until one tragic accident halted his dream and challenged his faith.

In 2009, Davis was the victim of a shooting that left him wounded in his back. It occurred at the worst time of the year – basketball season. Thankfully Davis’ injuries would turnout to be non-life threatening, and although the gunshot wound made him miss games at the beginning of the season, today he sees the bigger picture.

“I was out for some games, but as they say God works in mysterious ways because I was supposed to be paralyzed,” Davis said. “[God] knew how much I loved basketball. I prayed he would keep me in a stable condition and he did.”

A two-time defending champion with his former team, The Brotherhood, Davis plays every game like it is his last and takes nothing for granted.

“I’m glad to still be able to walk, knowing that at one point in my life it could have all been taken away,” Davis said. “I could have not been able to walk, or do what I love to do which is to play basketball. So walking motivates me to keep pushing.”

Since graduating Harding High School, Davis says the Legacy Leagues keeps him safe and out of trouble. He also gives credit to the league for giving him another opportunity to remain in touch with a sport that has become his saving grace.

“It is an all around great league, and best of all I am finally able to dunk,” Davis said.