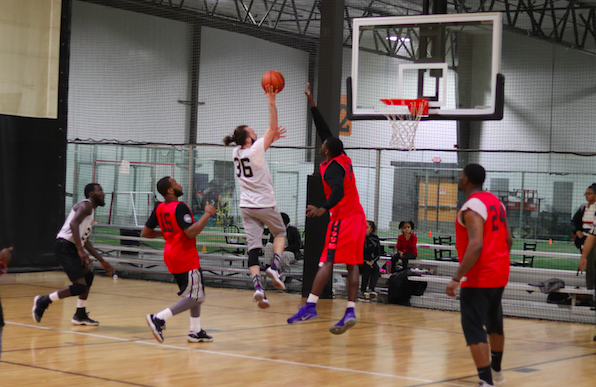 This week’s standout requires no introduction. He is his team’s center-piece and a career 1,000-point scorer in the Legacy Leagues. He is talked about regularly from week-to-week, but it is his brother who he gives credits to for his shifty, versatile play-style.

Carmine Santorelli of The Temptations is a combo-guard who possesses fantastic ball-handling skills; skills he says he developed while growing up.

“Growing up my brother and I played one-on-one for hours and I would have to come up with different combos and crossover moves to get by him,” Santorelli said. 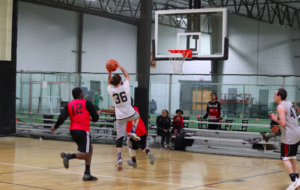 The Temptations’ Carmine Santorelli gets to the rack for a difficult lay-in during his team’s week 5 win over the Rim Breakers.

Santorelli was raised in Stratford, Connecticut along with his brother Nick. Like most households with siblings, him and his brother developed a sibling rivalry that was often settled over basketball games. Game after game they would push each other to the limit.

“Even though he is my brother, he happens to be the best defender I have ever played against,” Santorelli said. “He motivates me because without him I would not be half the player I am today.”

Santorelli’s hard work along with his brother’s harassing defense eventually helped him earn a spot on the Bunnell High School varsity basketball team. He flourished as his ball control got better and better so by the time his senior season came along he had the ball on a string.

After high school he went on to attend Gateway Community College and played for the Gateway Lions men’s basketball team. Santorelli is as driven in the classroom as he is on the court, only a few credits shy of his associates degree in general studies.

Now that he is no longer playing basketball for his college he appreciates what the Legacy Leagues brings to his life. It brings back the joy of competition and also allows him to take the floor with his brother, mentor, and motivator every game.

“The Legacy Leagues has more than a recreation league feel to it,” Santorelli said. “This league fills the void for me in my life.”