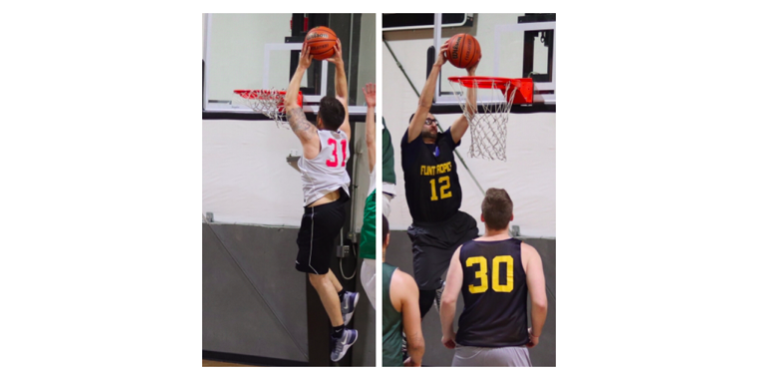 This week’s standout is a 2-for-1 special. Flint Tropic’s Mike Bozzuto and The Goon Squad’s Dom Migliaro both had stellar performances in week seven. These athletes dominate the game in different ways; Migliaro is a physical guard who loves finishing at the rim, while Bozzutto is a stretch-big with three-ball capability. Two galvanizing players for their respective teams, however, there was a time in history when these two talents complemented each other.

The 22-year-old Bozzuto was born and raised in Wolcott, Connecticut where him and his older brother dueled in the driveway in pick up games of basketball. At a young age he took a liking to the game, meeting some of his closest friends through basketball. Growing up his family encouraged him to be great, but most importantly to be himself,

“I was fortunate enough growing up to have a family that always pushed me to be my best self on and off the court,” Bozzuto said. 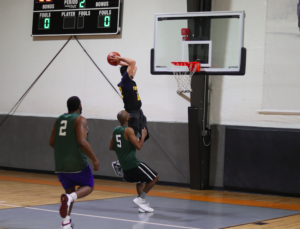 Bozutto slams home a dunk in his team’s Week 7 loss to The Chasers. The Flint Tropics are 5-2 so far this season.

In high school Bozzuto was a two-sport athlete playing both soccer and basketball. However his tall stature and soft touch around the rim made him a force on the hardwood. It was easy for him to get acclimated on the Wolcott Varsity basketball team because of so many familiar faces.

“I started playing with all my brothers on the Tropics in elementary school,” Bozzuto said. “We played in middle school and went on to play together in high school as planned.”

31 miles away in Monroe, Connecticut a basketball junkie was teaching his son everything there was to know about the game of basketball. Dom Migliaro’s father grew up in the projects in New Haven, Connecticut where he saw some of the best basketball talent in the state. Migliaro was only in grammar school when he says he fell head-over-heels for the game.

“I remember my father took me to a University of Connecticut game when I was eight-years-old and I saw and felt the atmosphere and knew I wanted to be a basketball player,” Migliaro said.

Even if he did not make it to the National Basketball Association, his dream was to make it in college. In order to make it to college, he had to first prove himself through the ranks of high school. Although Migliaro grew up in Monroe, his father’s rough background exposed him to a more physical brand of basketball.

His father, for years, would take him all around to play some of the best and toughest Connecticut had to offer. The constant training and early morning workout sessions paid off when Migliaro earned a spot on the Masuk High School Varsity basketball team. 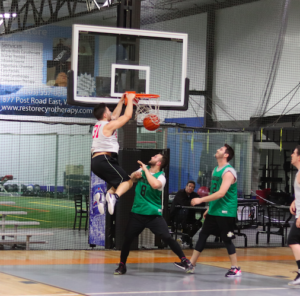 By the time both players were seniors in high school they had already began to etch their names in a piece of Connecticut basketball history. They were both getting looked at by multiple collegiate basketball programs but both men decided Southern Connecticut State University was the best fit after their high school playing days.

As freshman at Southern Connecticut they began to develop a bond on and off the court that would translate to a powerful friendship and several championships. The duo eventually ended up being roommates for their junior and senior season, and went on to graduate together after four years.

Bozzuto earned a bachelor’s degree in sports management and Migliaro in communications. So deeply in love with the game of basketball both men talked about looking for a league to join after college, and Migliario stumbled upon the Legacy League.

“I remember Matt Marconi posting a video of himself hitting a buzzer-beater and I showed Bozzuto the video and we were happy it was a mini-hoop league,” Migliaro said. “We knew we had to join after we were done playing at Southern.”

Both Bozzuto and Migliaro play crucial roles on their teams and their “A” game is expected every week from their teammates. Fortunately, for both players they produce because of their thick basketball background and pure respect for the game.

For both individuals they enjoy the Legacy Leagues for the competition and  the treat of getting to play against a former teammate.

“Its cool playing against Bozzuto,” Migliaro said. “The kid cannot miss, and he is definitely one of the best players in the league.”

The same respect is exhibited from his counter-part and best friend.

“Dom is a tough pass-first point guard who plays defense and can score,” Bozzuto said. “Any team would be lucky to have him on their roster.”