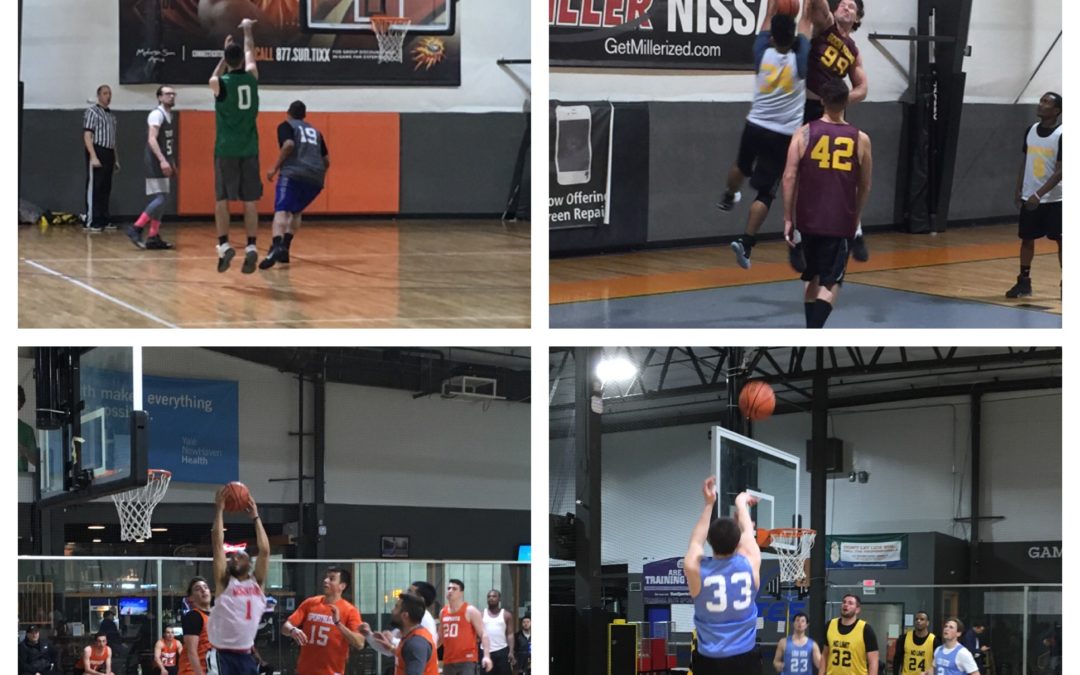 Stranger Danger finally lived up to their potential last week with a very solid win over Redemption. In Week 7, they take on a Sensual Chocolate team that is arguably hotter than anyone in the league right now. Led by Carmine Santorelli, Sensual Chocolate has been playing a dynamic inside-out game over the last few weeks, picking up four consecutive wins. Both teams are ready for this rematch from a season ago, where Stranger Danger knocked off the then-Temptations in a huge first round upset.

Stranger Danger will certainly have their work cut out for them, as they attempt to stop Santorelli from going off for his third-consecutive 40+ point game. For Stranger Danger, they will need to bring the same defensive intensity and communication from their week six performance if they want to walk away with a win.

After a slow start to the season, STP has finally hit their stride at the right time, picking up four-consecutive wins. Looking ahead at their week seven matchup, they take on an Untouchabulls team that has really struggled to find wins of late. Other than point guard Chris Rosario, the Untouchabulls have not found a reliable no. 2 option to help carry the load offensively. On the contrary, STP has continuously utilized a balanced four-man rotation off the bench, which has proven to be an efficient system. Unless Rosario can single-handedly overpower STP, I’d expect STP’s depth off the bench to be the deciding factor in this one.

No Limit continues to cruise through their schedule, staying undefeated through the first six games. Last week, they were challenged by Run TMC, falling behind by 14 points in the first half. However, they fought through the adversity and pulled away with the win in the fourth quarter. In week seven, Lob 203 is next in line to take on the juggernaut that is No Limit. Lob 203’s Eric Singleton has had a terrific season so far, but his supporting cast has been inconsistent at times. In this one, it’s truly going to take a full team effort if Lob 203 even wants a chance at competing with No Limit on Monday night.

The storyline heading into this one is that Greg Langston is coming off his historic 68-point performance for the Monstars in week six against Sometimes Y. While the scoring outburst was incredibly impressive, the opponent on the other hand, was not. In what looks to be a more competitive matchup, Sportslook is next to take on the undefeated Monstars in week seven. While the Monstars are the clear favorite on paper, expect to see a confident Sportslook roster who has been rolling this season. Sitting at 4-2, Sportslook has been a pleasant surprise amongst the top half of teams in the league. This is without a doubt the toughest matchup so far on the season for Sportslook, which will shed some light on whether or not they can truly compete with the upper echelon of teams in the league.

The Throne picked up their fifth-consecutive win last week with a blowout performance over Flight Club. In week seven, they’re matched up against a Fry Time roster that has not been able to find a rhythm yet this season. The Throne have been extremely impressive this summer, with their only loss coming week one against the still-undefeated Monstars. As for Fry Time, their lack of reliable scoring options from outside the arc makes this team very one dimensional, hence their winless record on the season. Now that The Throne are working with some real momentum, expect them to take advantage of a vulnerable Fry Time lineup on Monday night.

Sometimes Y finally gets a manageable opponent after starting out their season with arguably the most difficult schedule in the league. Sometimes Y takes on Flight Club in week seven, two teams who have struggled mightily in comparison to one another. While Flight Club seems to be the favorite due to their slightly higher position in the standings, expect a truly competitive matchup between two lineups who both want to take advantage of this opportunity. Keep an eye out for the electrifying Flight Club home crowd, as they tend to pack the stands for their team every Monday night.

After consecutive losses to The Brotherhood and No Limit, things don’t get any easier for Run TMC as they look ahead to a week seven matchup with Team Moose. Team Moose is coming off a historic victory over The Brotherhood, beating them in shocking fashion by double digits. The victory for Team Moose subsequently meant the first ever loss for The Brotherhood in Legacy Leagues history. With the win, Team Moose solidified themselves as a top contender in this league. For Run TMC, they have shown the ability to compete with the best teams in the league, yet have struggled to close out some of their games in the second half. Still, Run TMC is much better than their record reflects, so Team Moose cannot overlook them in this one. If they do, they might be the ones being put on upset alert.

The Bad Boyz earned their third win of the season against the Untouchabulls in week six, evening out their record at .500. Despite the victory, some may say that the Bad Boyz played down to the level of their opponent, making the game closer than it really had to be. Regardless, a win is a win, and the Bad Boyz are starting to gain momentum at the right time of the season. In week seven the Bad Boyz take on the Double Dribblers, who are still seeking their first taste of victory this season. Other than Bernard Brantley and Jesse Doucette, the Double Dribblers lack the caliber of players necessary to compete with most of the teams in the league. Unless the Bad Boyz let the Double Dribblers hang around like they did with the Untouchabulls, I wouldn’t expect a highly contested matchup in this one.

After a long-fought battle with Team Moose in week six, The Brotherhood are no longer invincible, finally being defeated for the first time in Legacy Leagues history. In week seven, The Brotherhood take on Goon Squad, a team that has played The Brotherhood tough in the past. Last week, The Brotherhood looked very vulnerable without Russ Payton on the court, which makes his injury status important to keep an eye on. Jonathan Robles also looked hobbled in his first game back for The Brotherhood, only scoring four points in his return. If Robles still isn’t 100 percent, and Payton misses more time, The Brotherhood could be at risk of suffering yet another loss. Mike Davis was outstanding in week six, yet still came up short due to the lack of support from his teammates. While Goon Squad is still the clear underdog, it wouldn’t be crazy to expect a game that may be decided by a few baskets either way.

The Flint Tropics got back on track in week six with a solid win over the Double Dribblers. The Flint Tropics had their depth on full display, easily earning the victory despite missing their two highest scorers. In week seven, the Tropics are poised to take on Redemption, last season’s runner up in the Finals. Redemption has struggled to live up to the expectations set from last season, sitting at 3-3 through six weeks. However, a matchup with the Flint Tropics gives Redemption the chance to show everyone that they are still a contender in the Legacy Leagues. These two teams both play fundamentally sound basketball, utilizing all players on their respective lineups. Ultimately, the Flint Tropics look to be the favorite, but don’t sleep on the experience and talent that Redemption has to offer.