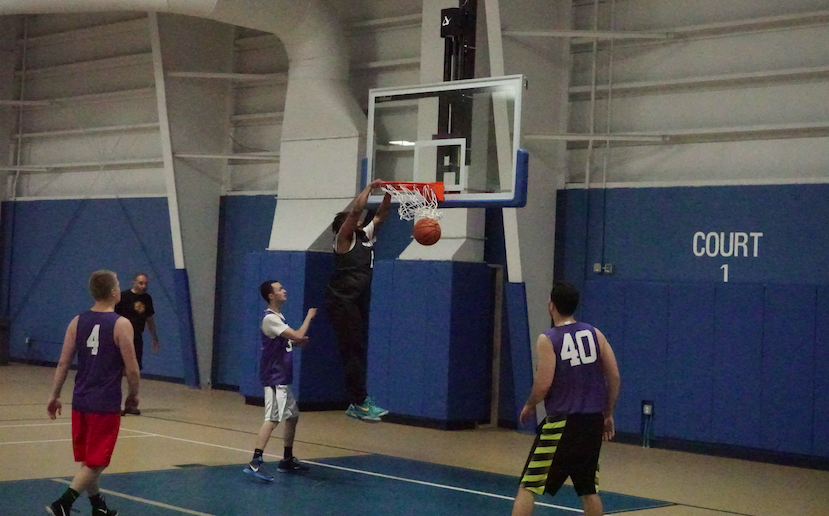 The Swish Kabobs haunted the The Halfway Crooks with their impressive pick-and-roll game as they would go 5-0 in the extra time and win 82-77, improving to 1-1 on the season. Finishing with a game-high 29 points, Randy Butler capitalized on a clutch open look to complete the comeback and send the game into overtime.

Once down 10 with minutes to go, The Swish Kabobs caught fire from deep, hitting five threes in the last four minutes. Joey Zocco’s missed free throw with only seconds to play kept the score at 77-74, allowing Butler to tie the game on a three in the following possession. The Halfway Crooks missed the half court heave and were not able to score in overtime.

“All game we were doing pick-and-rolls,” Butler said. “Tyler [Barbosa] got it, came across and threw it to me. I shot it, an it just went in.”

Both teams played with only one reserve tonight, however they were still able to come out of the gates hot. The Swish Kabobs trailed 48-46 at halftime after outscoring The Halfway Crooks 29-26 in the first quarter. Tyler Barbosa, who assisted on the final play of regulation, was an assist shy of a triple double, posting 27 points, 10 boards, and nine assists.

“We always like to come out hot,” Barbosa said. “We just happened to get good open looks and knock them down tonight.”

Butler lead all scorers with 29 points on 60.0 percent shooting, with two threes and four assists. Tezhan Massey had a double-double of his own with 12 points and 13 boards and teammate Lane Ukura added 11 points on the night as well.

“We were finding the mismatches, being aggressive, and attacking,” Butler said. “Going right at them.”

The Halfway Crooks were once again impressive, proving they can match up with some of the better teams in the league. Dylan Lincoln lead the pack with 22 points and 10 boards as four of their five players would score in double figures. Zack Moricas and Jared Hanson would also finished with 18 and 17 points respectively.

The Halfway Crooks finished the contest shooting 30.0 percent from deep, knocking down 12 triples. The rebounding battle was a tie at 32 apiece as both teams were able to control the glass for stretches. The Swish Kabobs were able to pull a second wind out of them, scoring 21 points in the fourth quarter after scoring only 27 in the second and third combined.

The Swish Kabobs look to make it two in a row against the winless Wild Hogs. The Halfway Crooks will face off against The Werewolves as both teams look to improve to 2-1 on the season.