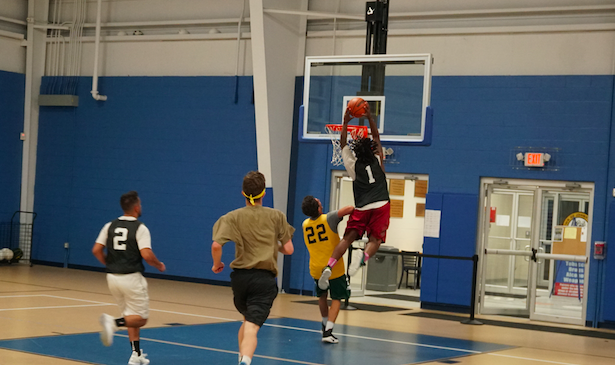 Close, but not close enough.

After being within an arms reach for nearly the entire course of the game, Shake N’ Bake (0-6) was unable to find their first win of the season as they fell to the Swish Kabobs (5-1), 63-58 on Tuesday night.

“It was a struggle, definitely a tough one,” the Swish Kabobs’ Kyle Valenzuela said.

Shake N’ Bake’s Dan Kennedy brought his team’s deficit to within one point in the fourth, after he nailed a contested three. Then, with five minutes left, then he gave his team the lead with another one of his three threes on the night. Kennedy then also tied the game at 56 on a free throw with two minutes to go.

It wasn’t until Randy Butler finished strong on multiple fast break opportunities, including a dagger in the form of a posterizing dunk over Kennedy, that the Swish Kabobs regained their lost lead for good.

“We were real sloppy the whole game and that kind of messed up the flow of everything,” Valenzuela added. “Once we took care of the ball we were alright and we were able to push the lead out to five.”

Building any sort of cushion was an issue for the Swish Kabobs throughout the entire game, as Shake N Bake’s Dan Kennedy and Collin Russell hit shots from beyond the arc to keep their team close in the first quarter of the game.

The Swish Kabobs’ Randy Butler exploded in the second quarter. His hard work and ability to execute in the paint not only gave the Swish Kabobs a 11-point lead at the half, but also reason to believe they were going to have a fairly easy time running away with the lead.

That was not the case coming out of the half.

While relatively disappointed in the effort, the Swish Kabobs will take their five-point win into next game, when they take on fellow 5-1 team, Boom Shakalaka, on Thursday night. For Shake N Bake, they look to finally find their first win of the season against another winless team, the Wild Hogs this Thursday as well.