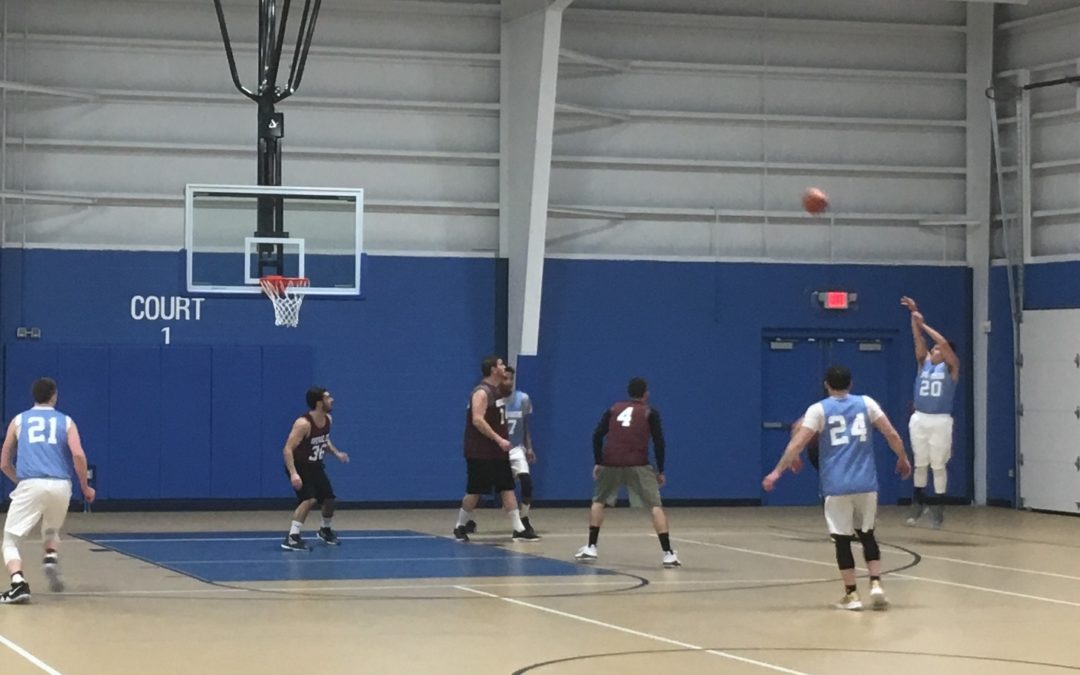 After a hot start, defense paved the way for the Swish Kabobs en route to an 82-51 victory over Average Joe’s in the opening game for the Rhode Island Winter 18 season tonight. The Swish Kabobs opened up the game on a 21-8 run and never looked back, eventually entering the second half with a 15-point lead.

While the Kabobs had four players scoring double-digits, it was their defense that led them to their first victory of the winter. They forced 23 turnovers—19 of them on steals—and held Average Joe’s to a mere 31.3 percent from the field. The Swish Kabobs also tallied nine blocks on the night, three of them coming from Tyler Barbosa.

It’s hard to overlook Barbosa’s night on defense, recording five steals along with his three blocks, but it was his scoring that stood out. Barbosa led the game with 23 points on 10-of-16 shooting and scored the only 3-pointers for the Swish Kabobs. He also added four assists to the already-stuffed stat sheet.

Aside from Barbosa, the entire Swish Kabobs offense looked impressive as well. The team had 18 assists on the night. Lane Ukura and Marquis Jones added 19 and 16 points, respectively, and Kyle Viera scored 10 points to go along with 11 rebounds and seven assists.

“I got a lot of good players around me,” Viera said. “They make it easy to make the highlights. They got something against the rim. I just throw it up, and they take care of it.”

While Viera’s scoreline won’t drop any jaws, his highlights may do the trick. Most of his seven assists came from alley-oop passes, and he added a few poster-worthy dunks in the second half.

“I’m a little guy,” he said. “I never really got the chance to do this. Not a lot of these guys really have, so we definitely had something to do tonight.”

Average Joe’s looked to Sloan Lazzareschi for most of their offense. Lazzareschi spent most of the game handling the ball and led the team in scoring with 14 points, 12 of them of the 3-point variety. Steve Pirri and Steven Villucci combined for 22 points and Keith Murray pulled in 10 boards. The ball wasn’t moving for Average Joe’s like it was for Swish Kabobs, though, only tallying nine assists.

As for Average Joe’s, they’ll look to get back to .500 against a tough Boom-Shakalaka team next week. The Fall 17 runner-ups won their first game tonight against the Wild Hogs by a score of 82-48 behind five players with double-digit scoring.