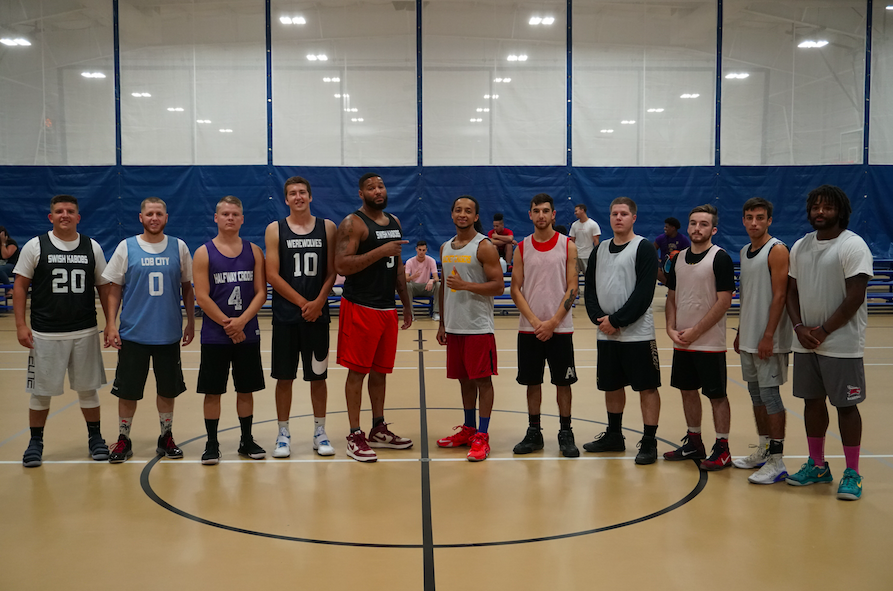 With alley-oops, buzzer-beaters, clutch threes and even a comeback victory, the Rhode Island Summer 2018 All-Star Game had it all, with Team Barbosa stealing a 106-105 victory away from Team Butler in the final seconds despite being down 13 at the half.

While Greg Holt (Lob City) took home the All-Star Game MVP, it was Greg Bell (Swish Kabobs) who brought the victory to Team Barbosa. In the final seconds, Holt found Bell in the corner off of a missed free-throw attempt, and Bell sunk his one and only three-pointer of the game to give Team Barbosa the one-point lead.

“I had 100 percent confidence,” Holt said about his teammate’s shot. “I knew he was going to hit it. I put it right in the pocket for him. Couldn’t do it any better.”

It was one of Holt’s nine assists on the night, one shy of a triple-double. Besides that, he had 31 points on 55 percent shooting with 12 rebounds and he played the second half strapped to a Go-Pro camera. Five of his 11 makes were from deep, and he had two steals on the night as well. Although it was his first All-Star appearance, his MVP honors were well-deserved.

Tyler Barbosa (Swish Kabobs) had an excellent game with the team he drafted, scoring 28 points on 50.0 percent shooting. He also hit four threes and was lights out from deep in the second half. Bell also gave a very efficient 19 points, shooting 9-of-13 from the field. He finished with 10 rebounds as well.

Last year’s All-Star MVP Brian Heston (Werewolves) had a great game himself, with 16 points and 16 boards, and Jared Hanson (Halfway Crooks) added 12 points after winning the Three-Point Contest earlier in the night.

Through the first half, it looked like Team Butler was going to take the game with ease. Cody Crawford (Lob City) was having an MVP-worthy game himself in his third All-Star appearance, hitting shot after shot from anywhere he wanted. He finished with a game-high 33 points, but cooled down a bit from deep in the second half.

Gino Forte (Werewolves) had a great night with 26 points and four threes. Mike Bandieri (Wild Hogs) helped with a double-double of his own, 14 points and 14 boards, and had five assists and three blocks to go along with it.

Despite all the effort, Team Barbosa caught fire late in the game, and that made all the difference. They scored 33 in the fourth quarter behind extremely hot three-point shooting across the board. Holt himself had a clutch three while heavily guarded a few possessions before the victory to bring his team within reach.

“It was just a fun game,” Holt said. “We came out and let it fly. No one cared about bad shots. We just had fun.”