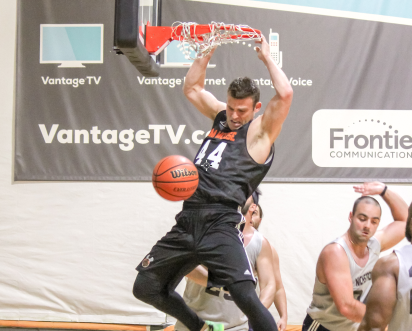 It was the game of the week between power-house Team Moose and Nickstrong,which featured a 33-9 fourth-quarter run that lead Team Moose to victory, 81-49.

This was an early season big game between a team who has been demanding some respect and a team that is trying to find their role in this league. On Monday night, we learned (if we didn’t known already) that Team Moose is going to contend for a championship led by a balanced offense featuring Melquan Horton who scored 24 points, Kevin Blake who scored 19, and Josh Balabuch who contributed 18.  But if you really watch this team play, you will realize that anybody on this team can go off at any time.

Monday night also taught us a lot about Nickstrong.  It has become pretty clear that they are a one-dimensional team led by player of the week Michael Vessicchio who only shot 28 percent on Monday night.  When he is not at his best, this Nickstrong team struggles to find consistent offense.

Anthony Vessicchio led Nickstrong tonight with 24 points on 26 shots, however, and Taivarr Pierce added 10 points as well.  These are the two other guys on this team that is going to need to increase their workload to be able to be a legit contender.  The big question will be if these three can all put it together on the same night.  If so, watch out.

Connor Daly returned tonight for Team Moose and credited tonights win on some new additions they brought in.

“We brought in Tyler Disabella tonight who really got us going with his big dunk,” Daly said.  “Also, Melquan subbing in for Brad was a big adjustment to help get us going late in the third.”

Team Moose will carry their 2-0 record against the Young Kings while Nickstrong looks to rebound against a banged up Sportslook team.

This weeks theme for Moose again was respect.  To think tonight put an end to Team Moose’s chip on their shoulder would be a crime.  This chip only got bigger as they won’t stop asking for respect until its granted.

“Can we please get the respect we deserve?” Daly added.