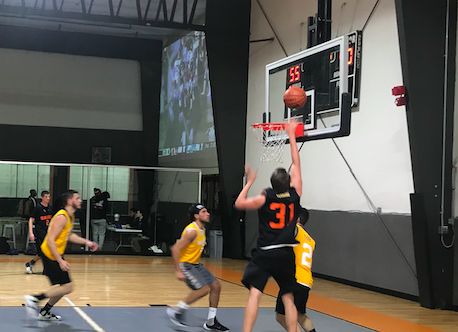 Team Moose held off the Young Kings, 78-54 on opening night and looked very Team Moose-like in their victory. Team Moose was missing some of their players and ran the full game with only four guys.

Team Moose got off to a hot start and ended the first quarter winning 20-4. Although the Young Kings were able to outscore Team Moose in both the second and third quarters, a huge fourth-quarter run secured the victory for Team Moose.

Horton, a former Defensive Player of the Year, anchored Team Moose’s defense with two steals and two blocks. Horton and his teammates were able to hold the Young Kings to a 28 percent field goal percentage for the full game.

Kevin Blake and Horton combined for 42 points and 21 rebounds as the pair led their team with double-doubles. For the Young Kings, Eddie Whitman led the way with 16 points and four three-pointers. The Young Kings showed heart as they were able to cut what was once a 16-point deficit, down to seven.

However, Team Moose’s defense proved too strong as they were able to fend off run after run. At times a few Myles Raymond dunks energized the Young Kings, fueling mini-runs that they went on. Team Moose was able to demonstrate good ball movement (13 assists) and poise on defense to secure the win.

It will be interesting to watch these two teams throughout the course of the season. I expect Team Moose to bring the same defensive intensity throughout the season, and be a strong contender to make a push in the playoffs. I believe the Young Kings will bounce back from this defeat and have the potential to have a strong season as well.