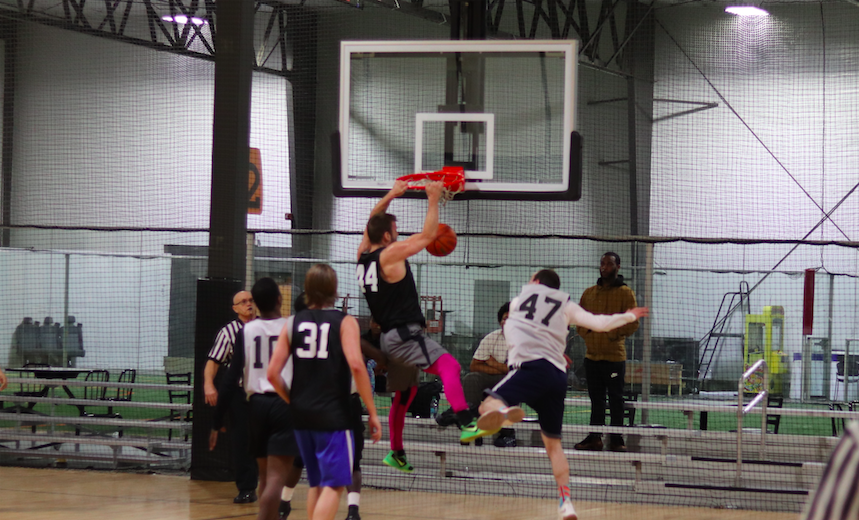 Despite a convincing 64-point win over Semi Pro last week, the Temptations go back to a .500 record after losing to Team Moose, 44-39.

The match between the Temptations and Team Moose was a tight, low-scoring one dominated by aggressive defenses on both ends.

In their win over Semi Pro last week, the Temptations scored 94 points, their highest of the season. They were able to do that with star Carmine Santorelli on the bench. Santorelli was out for the second straight game in Week 4. Unlike last week however, his presence would be missed Monday night.

After the first 20 minutes, Team Moose led by one. The Temptations would be limited to only 44 points, having only 18 in the first half.

Melquan Horton powered the Temptations offense with over half of his team’s points, 21. He also added 6 rebounds and 3 blocks. Team Moose was able to shut down shooting guard Nick Santorelli on offense, allowing him to only score 10 points. However on defense he had four steals and seven rebounds.

“We knew that they were pretty balanced and that they can kick and shoot. We tried to clog the paint and not let them get easy baskets,” Blake said.

The last minute of the fourth quarter would come down to free throw shots. Ultimately, Team Moose was able to hit their free throws and hold on to their single point lead.

Blake finished with 18 points, 12 of them coming from free throws. As a team, they took 25 free thows, making 16. Rob Harrigan was the second highest scorer on the team having nine points, while Brad Seaman dominated the boards with eight rebounds.

The Temptations go on to face the 3-1 Rim Breakers, who lost their first of the season tonight to the defending champion Monstars. Team Moose will face a hot Blue Devils team.

“I haven’t seen them (the Blue Devils), but I know that they drive and score a ton so I think the thing with us will be to work it offensively and try to get good shots,” Blake said. “I know they will be tough, but we are up to the challenge.”