Team Moose prevails in early-season showdown versus The Throne 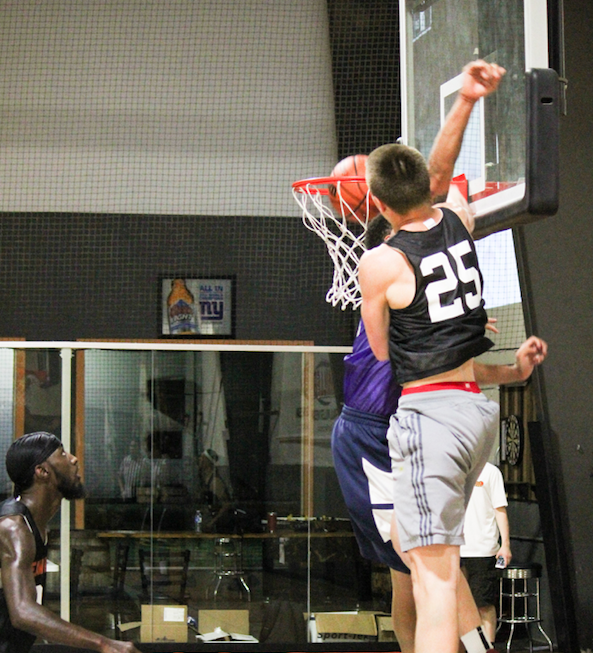 It was a highly-anticipated Week 1 matchup between Team Moose and The Throne, where Team Moose used a 15-6 third quarter to over come a halftime deficit to beat the Throne, 64-55.  It was a back-and-forth affair with Team Moose trailing throughout the first half but they were never out of it.  They used their strong defense to force The Throne to have to grind out every possession and used a balanced scoring from Jackson Meshanic, Kevin Blake and Melquan Horton who all scored over 14 points respectively.

This win was different, however, for Team Moose.  After the game, veteran leader Brad Seaman put the league on notice after hearing some of the disrespect around the league.

“Everyone retools (Run TMC). We beat them the last two years; The Throne, we took care of them,” Seamen said.  “The outrage of disrespect for Team Moose has got to stop,” Seamen demanded.

The Throne just could not keep their first-half momentum into the second half and rebounding was a big part of that.  They were outrebounded 26-13 by a bigger, hungrier Team Moose. Dominique Langston did all he could with a strong 18 point. However, it just was not enough.

This is a very similar Team Moose that the league is used to seeing. However, a key addition has been Melquan Horton, who really stepped up nicely and looks to be a nice addition to this team who already demonstrates some of the most chemistry in the league. Horton scored 14 points but the thing that impressed the most was his defense.  Horton is known to be one of the better defenders in this league and this could be the piece to put Team Moose over the edge with his physical play.

“Nothing against the opponent, it was a hard-fought game, but enough is enough,” Seaman said.

The Throne will battle J’s Treys and Fadeaways next week as they look to bounce back, whereas Team Moose looks to start off 2-0 as they take on the rookie team NickStrong.