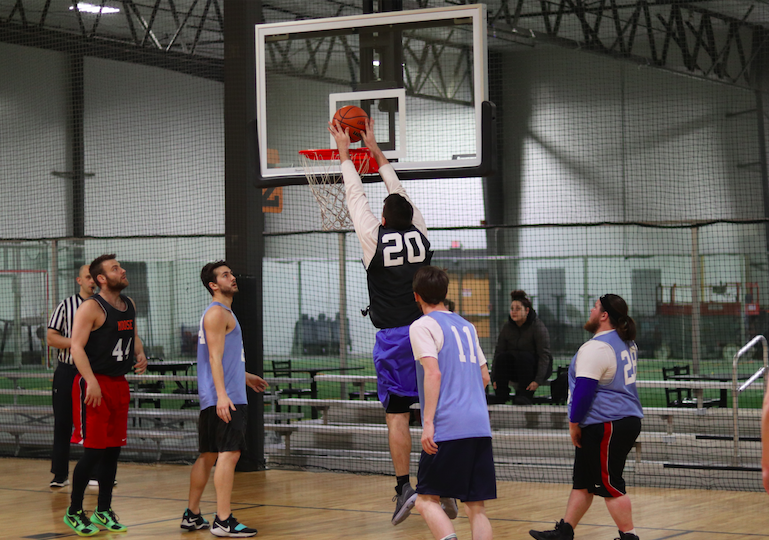 With the playoffs right around the corner, Team Moose entered their final matchup of the regular season with very serious looks on their faces, translating the intensity into a quintessential Team Moose basketball game. In a game that seemed over before halftime, Team Moose cruised to an authoritative win over Blood sweat & Beers, 77-50.

Blood, Sweat and Beers finish the season 2-7, as they await for the outcome of Tuesday night’s Week 9 games to see what seed they will be. They know they will enter the postseason somewhere between a ten and twelve-seed.

Team Moose did what they have always done best; they move the ball incredibly unselfishly on the offensive end, while simulating scores through fast break opportunities thanks to some stingy lock-down defense.

“We wanted to get out in transition and get as many easy baskets as we could,” Team Moose’s Kevin Blake said. “That was the game plan.”

The ball movement from Team Moose was seamless on Monday night, dominating their opponent in the assist department 21-8. Brad Seaman, Kevin Blake and Trevor Chaves all had at least five assists, a credit to the system in which the entire team is committed to playing under.

Despite flying under the radar nearly all season, Team Moose looks to be a very interesting team hitting their stride at the right moment heading into the playoffs. Led by their vocal team captain Brad Seaman, it’s going to take a team with serious talent and commitment in order to out this squad come playoff time.

For BS&B, if they’re looking for a silver lining in this performance to give them some confidence heading into the playoffs, it could be the return of their big men Matt Serrano and Edgar Trujillo. After serving suspensions, both players made their official return at halftime, combining to score the team’s first 12 points to start the second half.

Despite fizzling out after the strong start, their energy and hustle off the bench clearly made a tangible impact on the course of the game, and could bode well for this team’s upset chances for the postseason.

“It’s going to be interesting to see where things shake out over the next few days,” Blake said. “Going into the playoffs, anything can happen, we just have to be prepared.”