Team Moose tramples over the Untouchabulls in season finale 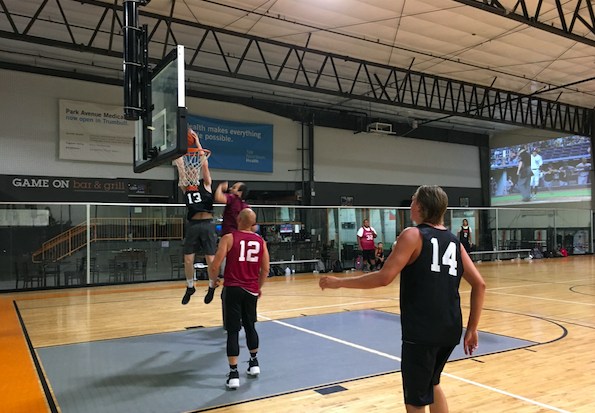 With the last week of the regular season officially in the books, Team Moose will head into the postseason with a 7-2 record after once again playing suffocating defense, forcing turnovers and generating transition baskets en route to a 77-59 win over the Untouchabulls.

“Fortunately we were able to get the W,” said Team Moose’s Jay Joyce. “We’re still trying to work Trevor into things. I think it’s working out pretty well for us.”

In the three weeks he’s played, the addition of Trevor Chavez has already paid huge dividends on both ends of the floor. It’s the sky-scraping size of Chavez that makes him so difficult for teams to matchup against. He scored 13 points on 6-for-6 shooting from the field in Week 9. Surrounded by a fundamentally-sound lineup, Chavez has flourished in his role as an elite rim protector and low-post presence for Team Moose.

For the Untouchabulls, this was arguably one of their best performances of the season. Despite the loss, the Untouchables showed a consolidated effort in competing with the defensive-juggernaut that is Team Moose. Chris Rosario scored 24 points on 50 percent shooting from the field, but unfortunately it wasn’t enough for the Untouchabulls.

Regardless of having a tough season, the Untouchabulls have a very favorable first-round matchup against Flight Club on Thursday night. The Untouchabulls recently defeated Flight Club in Week 8, so there is no reason to believe they can’t do it again, despite being the lower seed.

As for Team Moose, they will look to be a powerhouse lineup with high expectations. Coming into the season as a mystery-team, Team Moose has risen to the top, solidifying themselves as a true title contender.