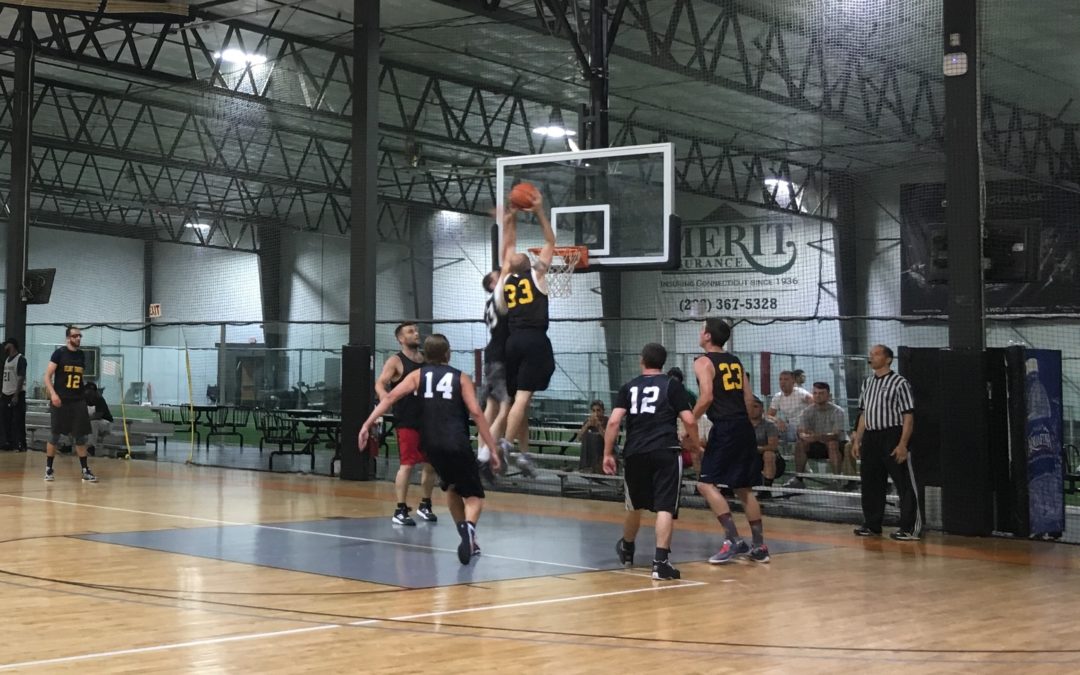 After steamrolling through the first three games of the season, the Flint Tropics ran into a brick wall in the form of Team Moose and their lockdown defense.

The Tropics failed to make a field goal in the first quarter, setting the tone for a slow-paced, defensive battle which played into the hands of Team Moose, who walked away with a gritty 51-38 win to spoil Flint Tropics’ undefeated resume.

“It’s what we love to do,” Team Moose’s guard Jay Joyce said of the airtight defensive effort. “We hang our hats on hard work and defense.”

It took hard work from Team Moose to compensate for Kevin Blake, who missed for most of the first half, and their leader Connor Daly, who missed time due to injury in the second quarter, but returned in the second half and finished one rebound shy of a double-double.

The Team Moose defense gave the Tropics fits all night, as the usual high-flying offense was grounded for one first-quarter point and finished 4-of-27 from beyond the arc. Team Moose also forced 10 steals, resulting in crucial points in transition.

When they weren’t running in transition, Team Moose was slowing the game down to a crawl with disciplined half-court offensive sets, milking plenty of clock and making a comeback attempt by the Tropics nearly impossible.

Team Moose showed off their commitment to fundamentals down the stretch of what was a tight defensive effort by sinking their free throws to seal the win. The team finished 14-for-17 from the charity stripe, with many of their attempts coming in the game’s final minutes.

With Daly banged up and Blake late to the party, Dan Nadaff led the way for Team Moose in the scoring column, finishing with 19 points on 50 percent shooting.

Mike Bozzuto highlighted most of the offense the Tropics could muster, finishing with a game-high 24 points. His hot shooting put the Tropics right back in the game at the start of the second quarter, but nobody on the Tropics finished with more than four points besides Bozzuto.

The statement win for Team Moose comes one week after a wake up call in Week 3 when they were downed by No Limit. After rebounding to take down a highly touted Tropics team, Team Moose is ready to meet the other top teams in the league.

“We’re right there in the thick of it with all the best teams in the league,” Joyce said of their place in the league. “We always have a chance because we play defense every game.”