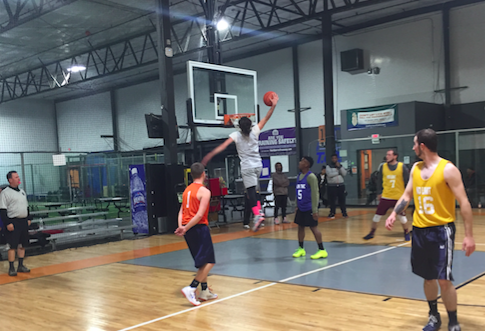 The second Legacy Leagues All-Star Game was a star-studded affair Monday night, as Team Santorelli collided with the likes of Reggie Stewart and Team Marconi in a high-flying, rim-rattling forty minutes of basketball.

In an extremely entertaining game that saw over 200 points scored between the teams, Team Santorelli came out with the victory, 132-117.

The Brotherhood’s Michael Davis showed why he is one of the most talented players in the league, dropping 50 points on 12-for-19 shooting from three, and taking home the Sportslook Passing League All-Star Game Most Valuable Player award honors.

Team Santorelli controlled the tempo for most of the first half, utilizing Carmine Santorelli and Erik Silva’s Temptations teammate chemistry to move the ball around, as Mike Davis and the Cereal Killers’ Adam Samuel roamed the perimeter until they found a gap in the defense and took it to the rack.

Team Marconi wasn’t fazed, and in the second half began to close the gap between them and their opponent. Sportslook’s Bryan Acevedo began to find his rhythm, as he and Mike Davis went shot-for-shot from beyond the arch, culminating in a 34-point third quarter for Team Marconi.

But it wasn’t enough, as Team Santorelli proved to be too strong. Team captain, Carmine, finished the night with a triple-double (21 points, ten rebounds, ten assists), and Adam Samuel added 32 points. The Air Ballers’ Jaylon Smalls had 14 points and Silva finished with 15.

No Limit’s Howie Miller was Team Marconi’s high scorer on the night with 35 points. Run TMC’s Reggie Stewart added a double-double (26 points and 16 rebounds), while Acevedo went 5-of-9 from three and finished with 25 points. The Titans’ Steven Echols had ten points, Scott Corchard dropped 13, while both had five assists each. Three-point Contest Champ John Rullan finished with eight points.