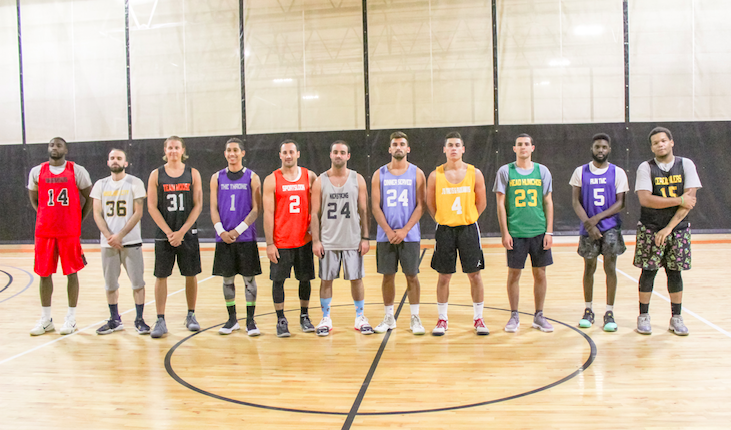 A star-studded Legacy Leagues night resulted in a high-scoring All-Star Game captained by Will Hudson of Run TMC and Keivon Turnbull of the Rim Breakers. Team Turnbull finished off a back-and-forth affair with a tight 104-97 win.

In addition to the win, Turnbull took home All-Star Game MVP honors after posting a game-leading 32 points to go with his 8 rebounds and 2 steals. But in context of the night, it was all fun and games regardless of the result.

“Awesome time. Had an amazing time,” Turnbull said of the game following his team’s win. “I had great teammates and we got the win.”

The game started off with four consecutive three point opportunities made from both sides and it seemed as though neither group would miss a shot the entire night. However, they came back down to earth midway through the first quarter, but kept scoring at a high enough pace to end the opening frame with Team Hudson up 24-22.

Whether it was Turnbull taking it strong to the hoop, Hudson draining three-point shot after shot or The Throne’s Jason Hernandez putting a defender on skates, the second quarter was entertaining as well.

The backcourt combo of Js, Treys & Fadeaways’ Joe Nemchek and Dinner’s Served’s Matt Terrasi added much-needed support to Team Hudson and even connected for more than a few alley-oops as well.

Going into the half, Team Hudson remained up on the scoreboard by four points.

The competitive levels started to get higher in the second half, especially from the trailing Team Turnbull. Shocker City’s Carmine Santorelli showcased his handles and passing abilities early on, while Turnbull continued to be a force down low.

Eventually, the game became a shootout, as Terrasi, Nemcheck, and Run TMC’s Eric Singleton, — who sneakily was just five points and one steal short of a quadruple-double (22 points, 10 assists, 9 steals and 5 rebounds) — drained deep threes for Team Hudson.

On the other side, Santorelli, Hernandez and Nickstrong’s Michael Vessicchio kept taking it to the hoop strong, but the dagger came in the form of a breakaway, reverse dunk from Turnbull to effectively call game on the All-Star Game.

In early rumors regarding next season, there was word that Turnbull may not be returning to the Rim Breakers for the winter.