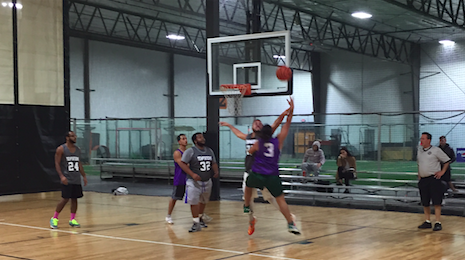 The Air Ballers were the “rolling stone” to the Temptations on Tuesday night. With Nick out, it comes as no surprise that the one Santorelli brother playing would make his presence known. In the 88-57 victory, Carmine Santorelli dropped an effortless 31 points, 14 rebounds, and seven assists.

Jaylon Smalls has remained remarkably consistent this season, once again notching 22 points, nine rebounds, and three blocks on the night. Smalls and the Air Ballers will look for their first win next week against The Brotherhood (4-0).

The Temptations coasted out to an easy 14-point halftime lead before blowing the game wide open in the fourth, outscoring the Air Ballers 26-12 in the final frame. Despite the large margin of victory, the Temptations had some difficulty connecting with passes in transition, a weakness that should be alleviated by the return of their primary ball-handler Nick Santorelli.

Erik Silva, the most efficient player in the league, tallied 31 points on 12-for-18 from the floor. This actually marks his least-efficient shooting night, bringing his field goal percentage down to a mere 80.4 percent.

The Temptations are not content with just getting the victory, they also wanted to focus on, “getting assists and no turnovers,” Bryan Pratt said. They look to improve their ball movement next week against The Kekambas (2-2), who are coming off a big win against Run TMC.

The Air Ballers Louis Verderame thinks his team can turn it around, summing it up in one word: “Defense.”