The Brotherhood bullies their way into second-straight Finals 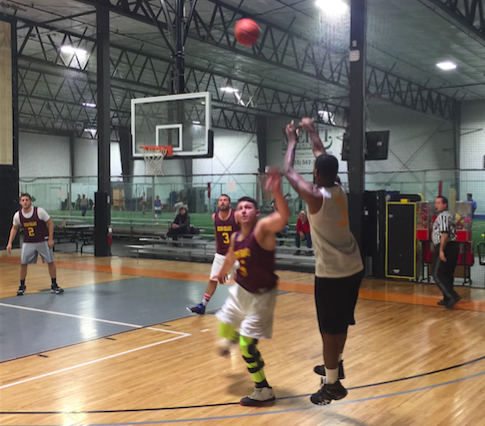 In the heavily anticipated rematch of The Brotherhood and Goon Squad, there was a lot to be excited for as the Brotherhood’s undefeated streak and a shot at a second consecutive trip to the Finals was on the line. While The Brotherhood looked uncharacteristically shaken the last time they played Goon Squad, when it mattered most in the semifinals of the Legacy League’s Fall 2016 season, The Brotherhood solidified a commanding victory blowing out Goon Squad, 84-63.

In a night where Offensive Player of the Year Russ Payton had a double-double, and last season’s Most Valuable Player Michael Davis hit eight threes en route to a 30-point performance, Goon Squad desperately missed point guard Brandon Massaro. A Brotherhood team that led the league in steals this season feasted on the vulnerable Goon Squad offense with their aggressive press. Finding themselves down 13 at the half, Goon Squad struggled to keep their heads above water.

“It hurts not having Brandon [Massaro] here,” Goon Squad’s Matt Marconi said. “We’re just really tired right now. Hopefully we get a second wind and we get back in it.”

Going up against a team with a deep bench like the Brotherhood, without their primary ball handler and second best scoring option, Matt Marconi had to shoulder even more responsibility than usual. While Marconi provided a gritty performance, finishing with 34 points and nine rebounds, he would be the only member of Goon Squad to score in double figures.

“Number 42. That guy? He held the team down,” the Brotherhood’s Derrick Davis said during the postgame show reflecting on Marconi’s play. “They were missing their point guard. That’s even more impressive.”

The third quarter would see a 13-point deficit balloon to a 25-point hole, and the Brotherhood began to trample the clearly gassed Goon Squad. Four members of the Brotherhood scored in double-digits and really showed just how deep this team is. Derrick Davis and Kevin Rivera would provide 15 and 11 points respectively, to go along with Michael Davis’ 30 and Russ Payton’s 11.

Riding high off of the statement victory, The Brotherhood look to take their head of steam into the Finals, where they square off against the two-seed No Limit. Poised to take home their second consecutive Napa Auto Parts Championship Trophy, the Brotherhood’s final test will be against a team they know very well, both on and off the court.

“It’s gonna be a good matchup. We know them,” The Brotherhood’s Kevin Rivera said. “We’ve played ball against them all our lives.”

The stage is set for next week’s conclusion to the Fall 2016 season to be an instant classic. A team in search of a flawless championship run for the second-straight season must first get through their childhood friends. It goes down Tuesday, December 13 at 9PM.