The Brotherhood clamps down in second half, storms past Cereal Killers 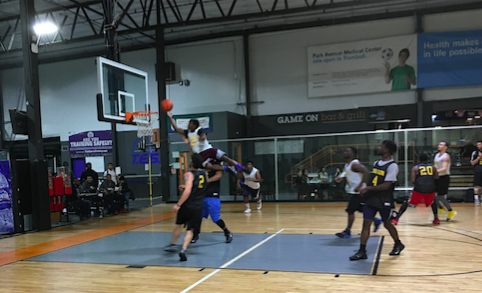 The Cereal Killers came out looking strong with a 24-20 lead going into the third quarter, as Russ Payton was unable to play in the first half. The Brotherhood came together as a team and managed to beat the Cereal Killers, 58-47.

With Payton on the bench, the Killers had the advantage right out of the gate with Michael Masciola and Will Hudson grabbing rebounds on the defensive side and finishing under the rim, but the role players were unable to provide support. Tyrhon Coward and Adam Samuel had disappointing games, as they combined for 17 points of the team’s 47.

As the disgruntled Brotherhood team was playing without Payton, it did not seem like anyone on the squad could step up for them, not even Michael Davis. With no one to rely on to put the basketball in the net, the team looked discombobulated and in need of one of their key players. Davis was the only other teammate to record double-digit points in the win.

“Without Payton, they couldn’t really get a rhythm and they didn’t know who to bring the ball up, and the Cereal Killers really took advantage of that,” analyst Eric Sidewater said. “But with Payton back in, it was a different story and they took care of business moving onto the semifinals to play Goon Squad.”

The Brotherhood, who are still undefeated in two seasons, look to continue their hot streak as they face off against the grueling Goon Squad team in the semifinals. These two teams faced off in week eight, but The Brotherhood squeaked by, 60-55.

Goon Squad was without one of their leading stars Matt DelMonte, and with him back in the lineup this team could potentially give The Brotherhood a run for their money after a triple overtime win in the quarterfinals against the Temptations, 71-68.