The Brotherhood gangs up on short-handed Pandas, remain perfect 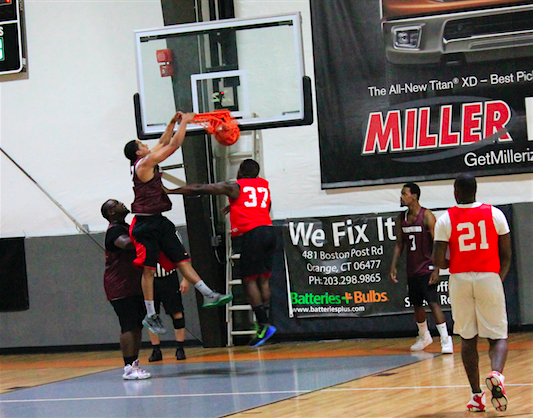 The Brotherhood has blown by teams throughout the Legacy League season, making it seem as though the other team is battling with fewer players. For the first stretch of The Pandas’ matchup against The Brotherhood on Tuesday night, that was actually the case, as they had just three players on the court for the opening tip.

While a fourth Panda’s player showed up late in the first quarter, The Brotherhood (5-0) had already put the game out of the Pandas’ (2-3) reach. The Brotherhood remained undefeated with a 127-59 onslaught.

“We really just wanted to come out and dominate, honestly,” The Brotherhood’s Jibril Chisholm said. “We honestly felt like the league doesn’t think we’re a dominant team, so we felt like we had to come out and get straight to the point.”

The Brotherhood owned the first quarter, walloping the Pandas 33-11, as it was quick to attack the undermanned opposition with its patented full-court press. The Brotherhood remained relentless throughout as they collected 23 steals in the game, now totaling a league-leading 82 swipes.

“[The press] always works,” Chisholm said. “That proves since we’re leading the league in steals.”

Michael Davis led the defensive charge for The Brotherhood, picking nine steals to add to his league lead of 29. Davis also scored 16 points, dished out 14 assists and grabbed nine rebounds as he nearly came out with a quadruple double.

Tyhron Coward scored a game-high 36 points for The Brotherhood on 17-for-23 shooting. Russ Payton was close behind, as he dropped 29 while both Chisholm and Derrick Davis finished with 18.

Yet, while The Brotherhood doubled up its opponent, Chisholm remained far from satisfied with the victory.

“There’s always room for improvement, but overall I thought we did pretty well.” Chisholm said.

Rondell Jones, who combined for 43 points and 23 rebounds in his two games played this season, and Joe Spain, who leads the league in blocks (9) and is second in defensive rebounds (31), were among the players that missed Tuesday night’s matchup for the Pandas. While all four Pandas reached double figures on Tuesday, Chanse Wilkie says that his team is among the league’s best when it boasts a full roster.

“I think we got a really good team when Rondell [Jones], Jelan [Mason]and Joe [Spain] show up,” Wilkie said. “I’m not calling them out. I know people got lives and they’re busy. I think when we have everyone here, we got time to rotate people in and we do a lot better.”

After dominating yet another week, Chisholm says his team has a message for the league:

“We’re coming for the championship.”