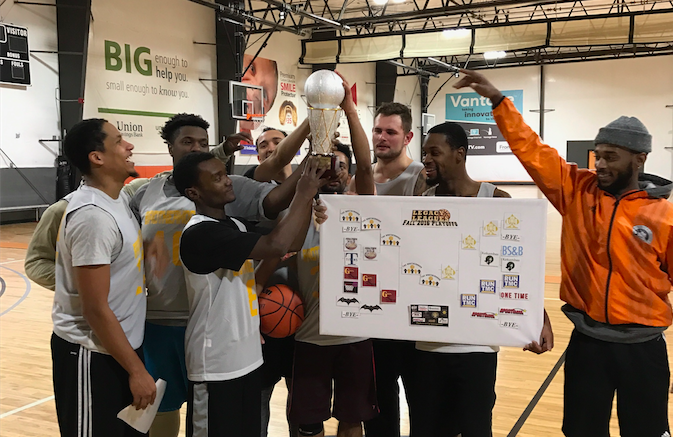 In the battle of the best, the top two teams, faced off to see who would hoist the Napa Auto Parts Championship Trophy and reign supreme for the Fall 2016 season of the Legacy Leagues. It was shaped up to be a battle for the ages and we got just that, as The Brotherhood absorbed an early No Limit lead to pull out the victory, 66-58.

No Limit burst out of the starting gate, scoring quickly and at will, as they showed the defending champs what the “Core Four” and No limit was all about. They jumped out to early first quarter lead, outscoring The Brotherhood sixteen to nine, as they began to gain momentum and confidence.

But Russ Payton (Fall 2016 Finals MVP) and The Brotherhood showed why they sat at the top of the power rankings and standings all year, as the still undefeated squad adjusted quickly and locked down on full-court pressure. They finished the second quarter outscoring the opposition 26-10 to grab a nine-point lead going into halftime.

Even as the juggernaut that is The Brotherhood powered into the second half trying to extend the lead, the extremely talented and determined No Limit team showed they weren’t going to let the reigning champs escape with an easy victory. No Limit’s Tarell Vargas and Howie Miller didn’t show up from beyond the arch, but proved to be key contributors, as they dropped 18 and 17 points respectively with a combined nine blocks. No Limit moved within four points going into the fourth quarter.

No Limit hung around and battled for every inch of the hardwood, but the Brotherhood showed who ruled the courts at Insports, as they outlasted the shallow bench of No Limit with a balanced and lethal nine-man rotation that was too much to handle in the end. The Brotherhood can once again herald themselves as the only team to win the Napa Auto Parts Championship Trophy in Legacy Leagues history.

No Limit’s John Rullan had 13 points, while the fourth “core” member Ronte Byrd finished with eight points and eight boards.

The Brotherhood’s Russ Payton finished with 17 points and five boards, as Mike Davis dropped 16, Rashaun Reid had 11 and Tim Adanti finished with a double-double (10 points, 12 rebounds).