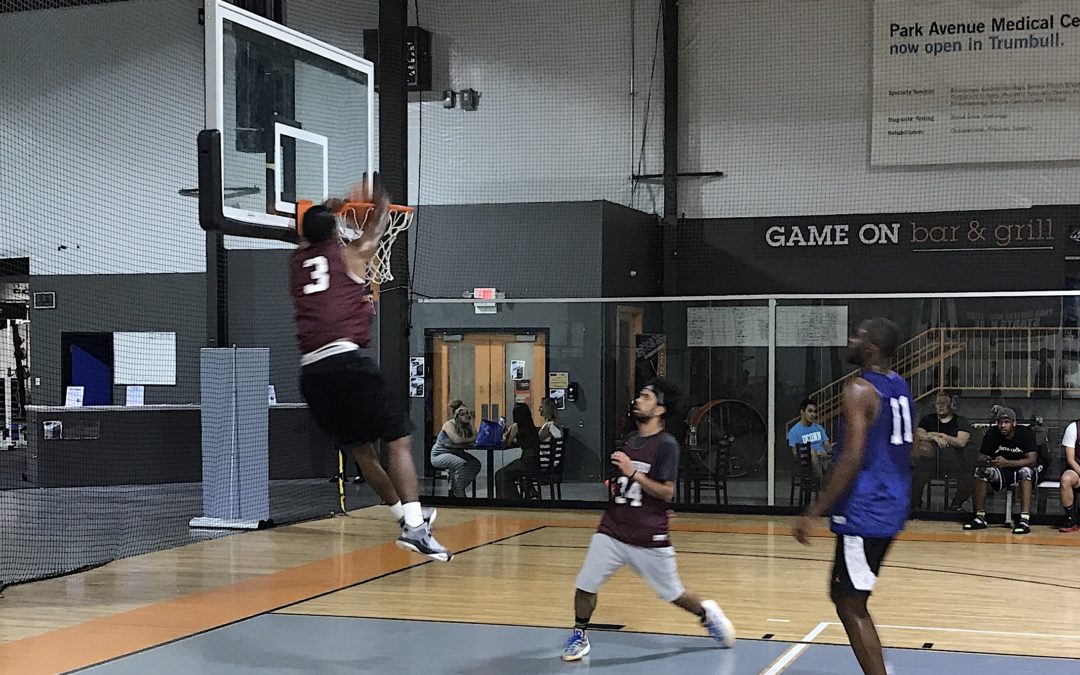 In a battle of chirps and dunks, The Brotherhood prevailed over Run TMC 109-94 on Monday night, keeping their streak of undefeated seasons alive.

After a victory in Week 4 against the Double Dribblers, Run TMC was set to face the undefeated Brotherhood in week five; a matchup that, unanimously, had spectators picking the men in maroon.

Carrying that momentum from Week 4, Run TMC came out of the gates hot led by the shooting of Jhamal Jones and the powerful drives and dunks of Quincy McDay. From the side of The Brotherhood, their start was slow without former MVP Mike Davis present.

While the first quarter came to a close, with Run TMC leading 20-15, Mike Davis walked into the venue and it became full speed ahead for The Brotherhood. He had a quick impact in his team’s play, finishing the contest with 24 points and seven assists over three quarters played. Russ Payton accompanied this performance, ending with 29 points of his own.

While the game winded down, and Run TMC’s deficit was seemingly too large, viewers experienced a typical, late game, Insports dunk contest between McDay, Payton and Mike Davis. In the loss, McDay captured 35 points and Jones snagged 20 of his own for the boys in blue.

Derrick Davis added 21 points knocking down 8-of-10 from the field, while Brandon Seabrook contributed 15 points and eight rebounds in the 13-point defeat.

“It was just a regular day overall,” said three-time Legacy Leagues champion Jibril Chisholm. Chisholm, per usual, was the source of the game’s trash talk, ending his night with a quiet eight points and three steals.

In Week 6, The Brotherhood will take on a well-rested Team Moose who forfeited their game against Sportslook this week. Team Moose, led by Conor Daly, is averaging just 50 points per game, however, their strength lies on the defensive side of the ball and their patience to score while The Brotherhood deploy a run and gun tactic, leading the league in points and are third in steals.

Run TMC faces a No Limit squad who is making their case to be the best team in the league behind the standout talent of Tarell Vargas, Howie Miller and Rashawn Hendricks. No Limit leads the league in steals and three-pointers made, and is second in points, which will cause trouble for Run TMC who failed to close out The Brotherhood’s shooters.