The Brotherhood’s undefeated streak continues after flattening The Land 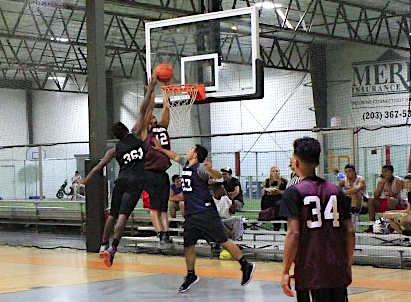 To no one’s surprise, The Brotherhood showed out again in week seven.

In fact, they appeared so dominant that analysts during the Legacy Leagues postgame show even said that there really aren’t many teams that stand a chance against this squad, and to be fair, it’s hard to challenge a team when three of the four starters are reaching double figures and putting up over 10 steals per game. This week The Brotherhood’s victim was The Land, who they beat 95-66.

The Land kept the game close in the first half, coming in huge part by the hot hand of Nick Gage, who ended with 13 points. As the first two quarters came to a close, The Land only saw themselves down by 14; a game that they felt was reachable.

“Every game has been a big deficit for the other team [when playing The Brotherhood] seeing that they’re undefeated, so let’s see if we can get it,” The Land’s Nick Gage said.

In the second half, The Brotherhood expanded on their lead and came out with a 29-point victory.

Russell Payton led the way for The Brotherhood, mounting a nice highlight reel to accompany his 24-point contest. Following just behind him was Tyrhon Coward, who scored 21 points on 13 attempts. More impressively, The Brotherhood continue to use their swarming pressure defense, coming up with 15 steals on the night adding to their league-leading total.

Heading into week eight, The Land will be testing their talent against a Sportslook squad, who is coming off of a victory against Run TMC and are hoping to see the return of their leader, Andrew Cavanagh, who is merely a bonus now for a team that has been holding their own in this dog-eat-dog league.

“We got a good team, if we just keep doing what we’re doing good things will happen,” Sportslook’s Nick Bacarella said.

The Brotherhood will be facing ZewCrew in week eight, who seemed to struggle this week with the absence of Mark Harrison. However, it’s not week eight, or even week nine that The Brotherhood are thinking about. They are already looking forward towards the playoffs, and have their eyes set on the number one seed and a road straight to the championship.

“It’s not going to be any different in the playoffs,” The Brotherhood’s Derrick Davis said. “In the playoffs, teams might not hit 30 points, that’s how it might be.”