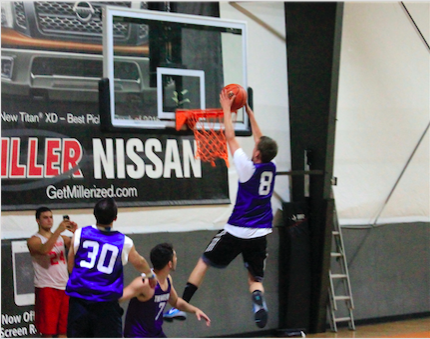 Run TMC’s 3-game losing streak came to an end Tuesday night after an 115-67 blowout over The Hateful 8, who played their best game of the year in the loss.

Rob Koripsky outscored The Hateful 8 17-11 by himself in the first quarter, and would go on to score a season-high 35 points on 16-of-27 shooting from the field. All six players on Run TMC scored at least 10 points including Will Hudson’s 21, Shaq Holman’s 20, and Matt Zocco’s 13, which helped complete a triple-double for Zocco that consisted of 16 rebounds and 11 assists.

Run TMC lost three consecutive games against The Pandas, Wake and Blake and The Brotherhood after winning their first game of the year against And-1. At halftime, Matt Zocco said he really wanted his team to get back to what they did in Week 1, and have fun.

Run TMC was hot from the floor all night, shooting 52 percent. They have a lot to look forward to now that they’ve gotten past a difficult stretch of games.

The Hateful 8 played their best game of the year Tuesday night, despite losing by 48 points. They broke two team milestones this week by scoring in double-digits in the first quarter for the first time this season, and also finally scoring more than 40 points in a game.

“We’re just playing with better team identity,” Kyle Awad said at the half. “We’re passing it, we’re moving it around, we’re active on the glass and we’re hitting our shots a little more so that’s good.”

Awad finished with 13 points and seven rebounds, but the man of the night for The Hateful 8 was Stephen Patrahai, who scored a season-high 28 points on 13-of-25 shooting. He was a force down low all game, and Run TMC failed to find an answer.

The Hateful 8 will square off against the last remaining unbeaten team, The Brotherhood, next week at 8 p.m., while Run TMC will be up against ZewCrew (4-1), who is coming off a physical win against Wake and Blake.