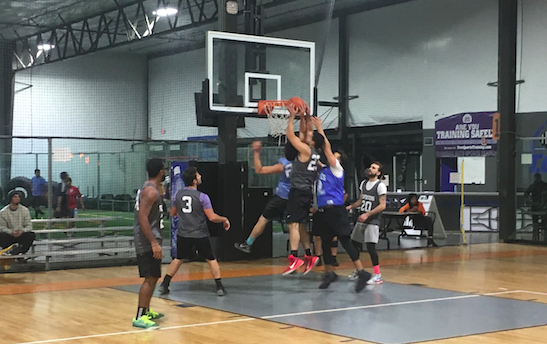 The Temptations came out quickly in the first half, scoring 34 points to Blood, Sweat and Beers’ 19. Unlike the loss to No Limit, the rest of the team for the Temptations supplied the necessary help. It was a full team effort in Tuesday night’s win, as they played both offense and defense efficiently.

“You know, we played regular ball, ran the fast break and that is what we do,” the Temptations Fred Milfort said. “We had a lot of bench points tonight, and a lot of people stepped up tonight and made some threes.”

The Temptations played with excellent team chemistry, which was essential to beat the 4-2 Blood, Sweat and Beers team. Milfort, Chris Días and Erik Silva all produced and stepped up to beat BS&B. It was not just Carmine Santorelli, and that is exactly what they need to continue to do in order to make a championship run.

“We need to limit the turnovers. We’ve been turning the ball over a little too much, and need to be more efficient on offense,” Blood, Sweat and Beers’ Cody DiLeonardo said. “I think we’re doing a good job on Carmine, but we need to put a hand in Erik Silva’s face because he is making his shots.”

It was easily noticeable that the BS&B team was still flustered from losing in both weeks five and six. After starting 4-0, BS&B is currently on a three-game losing streak and are desperate for a win before the playoffs start. Turnovers were the biggest factor BS&B lost, and they need to understand to play more simplistic in order to beat more difficult teams.

Blood, Sweat and Beers will look to end their losing streak as they play the winless One Time squad in week eight. The Temptations look to improve their record as they face Sportlook.