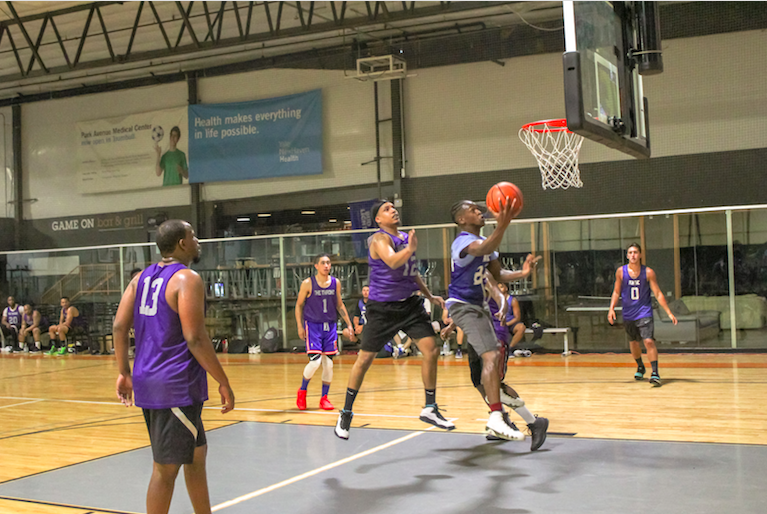 In what was an exciting Game of the Week matchup, The Throne took out the previously-unbeaten Run TMC squad, 80-63. The Throne got off to a scorching hot start outscoring Run TMC 29-13 in the first ten minutes and never looked back as they never trailed in this high-pace, high-intensity matchup.

The Throne took advantage of Run TMC being short-handed early on as two of their key players showed up halfway through the first quarter. With that being said, it might not have made a difference as The Throne was clicking on all cylinders with a balanced scoring attack.

They had four guys scoring in double digits, led by Jason Hernandez with 20 points, and Erick Langston with 18 points. Russ Payton produced another solid game adding in 12 points and nine rebounds.

This was a fun matchup that despite the 17 point win, felt a lot closer than the score indicated. Run TMC was never really completely out of it till the very end because Eric Singleton and Reggie Stewart once again did their thing scoring 20 and 16 respectively. Stewart added in ten boards to collect another double-double on the season.

For Run TMC, this game needs to be out of their heads as it just simply was not their day.  With the second half of the season underway, they need to focus on the bigger picture and that is making a championship run starting with next weeks opponent Sportslook.

The Throne didn’t feel like the underdog despite some of the predictions that were being thrown at them during the week.

The Throne also compared themselves to the NBA power-house Golden State Warriors as Erick Langston tabbed himself as Demarcus Cousins. If that is the case, then we might be looking at the team to beat for the summer.

Despite this huge win, The Throne needs to keep this momentum and stay hot against a very tough Rim Breakers team in Week 6. This will once again be another fun test for the “Golden State Warriors” of the league.