The Throne prevails in nail-biter vs J’s, Treys, & Fadeaways 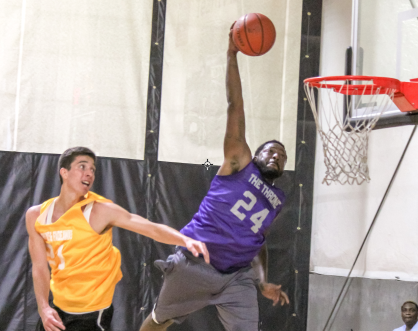 Experience was key in The Throne’s 55-46 victory over J’s, Treys and Fadeaways.

The game was ultimately decided in the final two-minutes. The Throne was able to capitalize on turnovers and make their free throws when it counted. Two defensive stops in a row took all of the life out of J’s Treys & Fadeaways in the end, along with 15-points by Erick Langston who came alive in the 4th quarter.

Both teams shot under 37 percent from the field and under 15 percent from downtown. The only bright spot for J’s Treys & Fadeaways was Joe Nemchek who poured in 22 points, as the rest of the team didn’t score over ten. However the game was a defensive stand off and not many points were scored at all.

“[This is a] message to the league, just know when we’re fully healthy and everyone’s here, we’re going to make a statement,” Domonique Langston said.

The Throne showed that they are still one of the top teams in the league, even without their full roster. Acquelle Gordon’s double-double only helped prove this point as to how they’re able to hold things down with a depleted roster.

Monday night was a huge, much needed bounce-back game from last week’s tough loss at hands of Team Moose, as they look forward to next week’s matchup against an (0-2) Blue Devil’s team who are still looking to get their first win.

Meanwhile, J’s Treys & Fadeaways look to redeem themselves next week against the (1-1) Head Hunchos, another young team trying to find their their place in this league.

Regardless of win or loss, both teams can’t be too happy about their shooting. You can expect for both The Throne and J’s Treys & Fadeaways to pick up the pace next Monday night and come out fired up.