The Throne squeaks by Sportslook for fifth win of season 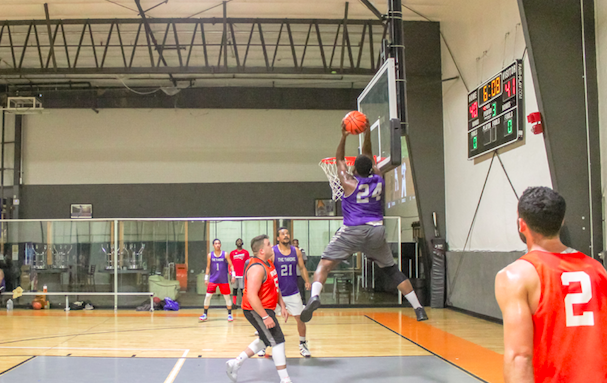 Although missing three regular players including Russ Payton, The Throne (5-3) was still able to beat Sportslook (2-6) — which finally had a full roster on their side for the first time this season — in a tight game from start to finish.

In a game that was knotted at 34 at the half, the decisive moments of the game came down to the last few seconds of the game.

After Tyrell Holmes finished a dunk to make bring his team within one point late in the fourth, intentional fouls ultimately served no help to Sportslook, as both Dominique Langston and Jason Hernandez drained late free throws to solidify a 64-59 win on Monday night in Trumbull, Connecticut.

“We needed it. That’s it,” Hernandez said on his team’s fifth win of the season. “The playoffs are coming up, we had to get a dub for Lee (Leite). Come back next week!”

Although Sportslook, the underdog of the two teams, got off to a strong start from the opening tip-off, The Throne kept on pushing back throughout the course of the first quarter. Big finishes in the paint from both Dominque and Erick Langston kept The Throne in it, while Dan Kokkoros was active for Sportslook.

The two teams traded buckets up to halftime until the score was back where it started, tied.

More of the same neck-and-neck play ensued in the third quarter when Hernandez and the two Langston’s clicked. However, it seemed as though with every Throne basket, Sportslook had an answer, led by John Zervos and his solid shooting from beyond the arc.

From the time that Sportslook made it a 41-36 game, there was no lead bigger than three points for either side in the third, until Hernandez hit a buzzer-beating shot to end the quarter and give his team momentum heading into the fourth.

There, more of the same equal battle continued until free throws put the opportunity to upset out of reach Sportslook and a gave a collective sigh of relief to The Throne, the initial favorites to win.

“We played good, but we just have to keep the energy up at all times,” Hernandez added. “We slowed down a little bit, which made the game close, but we just gotta blow people out.”

The Throne will have that opportunity when they play fellow 5-3 opponent Nickstrong next week. On the other side, Sportslook seeks to keep their high pace up against Above the Rim in Week 9.