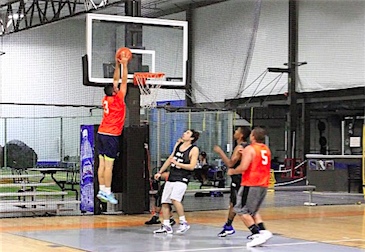 Tuesday night’s matchup featuring Sportslook and And-1 looked like it was going to come down to the final few minutes, until Bryan Acevedo caught fire midway through third quarter to lead Sportslook to a 65-55 win.

Acevedo, who finished with 34 points, struggled to find his jump shot in the first half. With Andrew Cavanagh unable to suit up for the third straight week, Sportslook relied heavily on Acevedo once again, but as Acevdeo struggled early on, so did Sportslook.

And-1 only trailed by four points at the half, thanks to another gutsy performance from Aaron Smith, who ranks fifth in The Legacy Leagues with 21.5 points per game. Sportslook struggled to keep And-1 off the offensive glass throughout the game, which led to many second-chance opportunities. And-1 finished the game with 14 offensive rebounds.

For the second straight week, And-1 held their own against a team with a better record than theirs, but once again, And-1’s abysmal three-point shooting put a halt to a possible upset. And-1 ranks third in Legacy Leagues with 168 3-pointers attempted through six weeks. However, they only make such shots 20.8 percent of the time. Sportslook held And-1 to 7-of-34 (20.6 percent) shooting from behind the arc, including 0-of-8 from Aaron Smith and 2-of-12 from Jake Miko.

While And-1 shot themselves out of the game, Sportslook managed the game wisely with a lead.

“Each game is an opportunity to work on something,” Nick Baracella said after the game. “Today Coach Christy made a point [of keeping] the ball away from their team with a lead. When we’re in a tight game, we’re going to need that.”

Sportslook took Coach Christy’s words of wisdom to heart down the stretch, keeping the ball in the hands of Acevedo as much as possible. Scott Christy came up huge on the boards to keep the ball in their position late in the game. He finished with a total of 21 rebounds (8 offensive) along with 13 points on 6-of-9 shooting from the field.

With the win, Sportslook bounced back from Week 5’s loss to Blood, Sweat and Beers to improve to 5-1. And-1 is still in search of their first victory heading into Week 7.

And-1 will have their best chance at a victory next week as they face of against The Hateful 8 in a game of two winless teams, while Sportslook will be tested against 3-3 Run TMC.