Titans second half push not enough to overcome Goon Squad 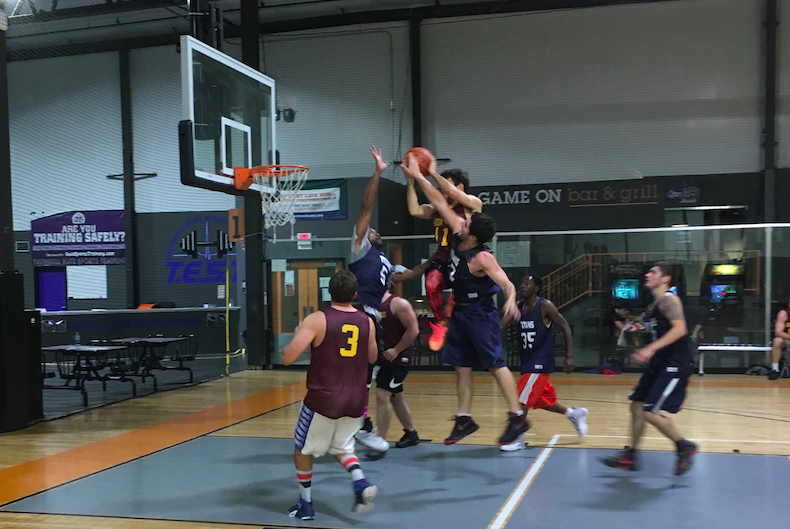 Despite a valiant effort, after five weeks of Legacy Leagues action, the Titans find themselves in a group they would rather not be in: the no-wins group. The Titans turned in their most impressive game of the season, but ultimately fell short 57-50 at the hands of Matt Marconi and the Goon Squad.

Marconi continued to lead his team in scoring with 22 points, but it would be the complimentary basketball from his teammates that would really make the difference. As a unit, Goon Squad shot 46 percent from behind the arc while also tallying 25 rebounds. After going into the half up 26-20, the Titans found themselves within reasonable striking distance.

“They got a lot of big guys, but we have a bit of speed on them. We gotta get our shooters going,” Cody Emond of the Titans said prior to the second half. “We gotta play our game.”

As soon as the clock started in the third quarter, the Titans came out firing. They would go on a 7-0 run and take a slim lead over a shell-shocked Goon Squad team. That would be the only time they would hold the lead, however. Goon Squad would shoot a lackluster 13-23 from the charity stripe, but their impressive team rebounding gave them extra chances on offense.

“We’re a bigger team and we have an inside presence so we tried to pound it. We would be winning by a lot more if we hit our foul shots,” Marconi said. “We really seem to start slow and play down to teams. Once we catch our wind and build momentum we break away from teams in the fourth.”

It is starting to click for this Titans team, and it is obvious that they can hang in this league. Jack Champagne made it rain from downtown, knocking in four of his six attempts and finishing with 18 points on the night. Derrick Edwards had a breakout night as well, making his presence made in the paint on both sides of the ball. Edwards is a high energy player who provided a much needed spark for his team, finishing the night with 15 points in addition to seven rebounds, four of those being offensive.