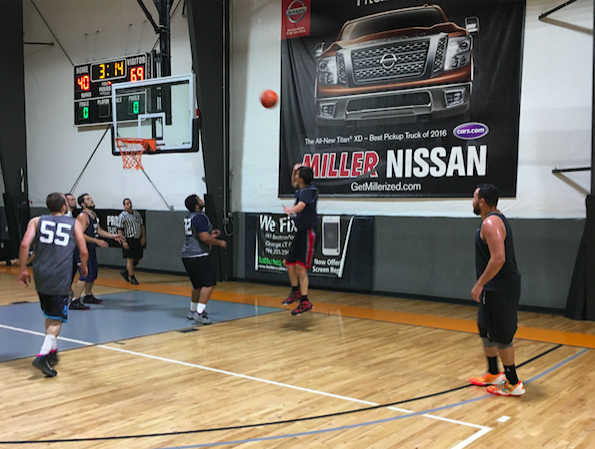 For those of you new to The Legacy Leagues, players and fans alike, I urge you put your big-boy pants on and fasten your seatbelts, because the Legacy Leagues is going to provide you with a basketball experience unlike any other. This is the kind of high-flying, fast-paced brand of basketball that separates the men from the boys and puts more hair on your chest. A transition into the-run and-gun style of play can be challenging, especially for first time players.

That said, it would prove to be a night of firsts as two new teams, the Titans and the Temptations, were put to the test. The Temptations seemed to control the pace of the game as they rolled over the Titans, 83-46.

Nick Santorelli of the Temptations said it best when asked to breakdown the season opener.

“What we kept doing was just running them,” Nick Santorelli said. “Running them out of the gym.”

And run they did. If nothing else, one must be conditioned to compete in this league. The Temptations just seemed to have a little more gas in the tank all game as they led from wire to wire.

The Titans lacked a truly dominant scoring force as Ty Drish was his team’s high scorer with 13 points. The real scoring, unfortunately for the Titans, would come at the hands of Nick’s brother, and former Legacy Leagues breakout star, Carmine Santorelli.

The Santorelli brothers had obvious chemistry on the floor dishing alley-oops and seeming to find one another time and again for easy buckets. While the Titans remained competitive through the first quarter, they started to lose traction as the game wore on. The lead would grow to double digits as the Titans went into the break behind 28-37.

The second half would only see the lead grow for the Temptations. What was an 11-point lead would eventually turn into a 36-point victory for the fast break savvy Temptations. Carmine would continue his splendid night, finishing with 30 points, six assists, three blocks, 3 steals and two rebounds, establishing himself as a dominant player in this league.

It would not be a one man show for the Temptations however, as Erik Silva churned out a great night. tallying 15 points and four rebounds, while shooting a perfect 7-for-7 from the field.

Ball security would be the achilles heel for the Titans, who were the victims of 10 steals. Costly turnovers led to fast break points that allowed the Temptations to coast to their first victory.

The Titans will have to adjust quickly to the pace of play and find some scoring if they wish to compete with some of the proven teams in this league. The Titans’ fortunes don’t appear as though they’ll be changing any time soon as they face the defending champions Brotherhood next Tuesday.

As for the Temptations, they will stick with what worked best for them in week 1: “Getting fast break points… We run and gun, that’s what we do,” Nick Santorelli said. In week 2, The Temptations will square off with ex-Brotherhood spark plug Tyrhon Coward’s new team, the Cereal Killers.