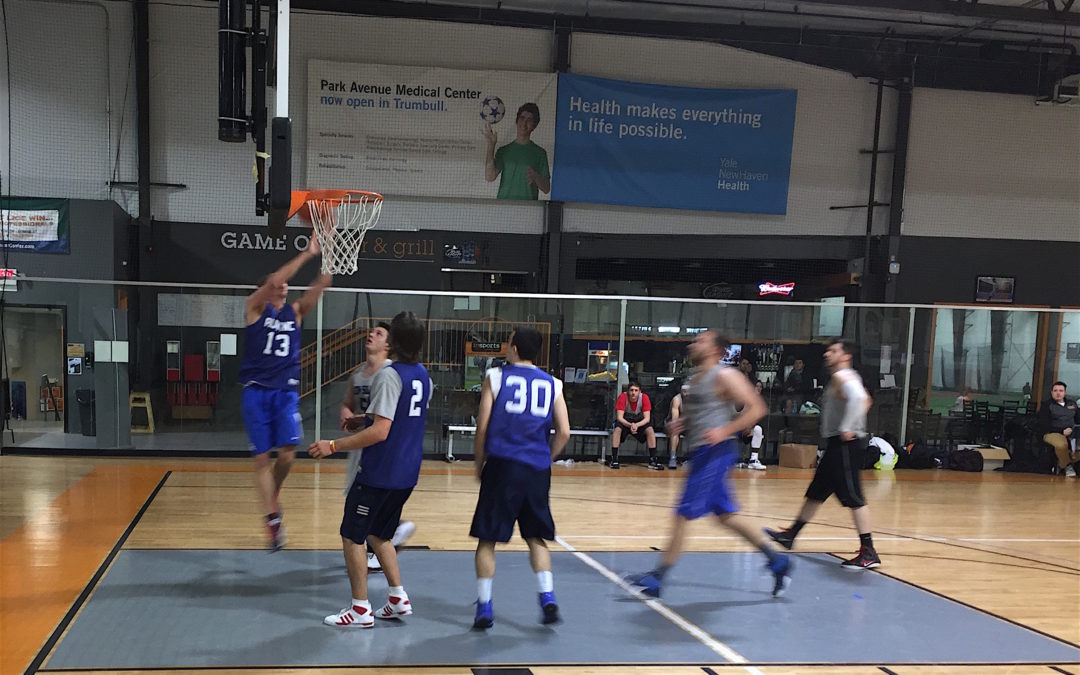 Run TMC not only advanced in the Winter 17 Legacy Leagues playoffs Tuesday night, but they also made some history while doing so. Run TMC is now the only team in league history to win at least one playoff game in each of the league’s first three seasons.

Seventh-seeded Run TMC trailed by as many as seven points in the fourth quarter to tenth-seeded Goon Squad, but was able to fight back and escape with a three-point first round win, 75-72. Despite only having five players in attendance, every player for Run TMC got into the scoring column and pushed the pace throughout the contest to advance to the quarterfinals.

Goon Squad dominated the third quarter, outscoring Run TMC by seven points, but found themselves in a tied game with just two minutes to play. Kevin Blake hit a reverse layup to give Run TMC a lead for the first time in the fourth, only to see Matt Marconi hit two free throws on the other end to tie the game back up at 68.

Matt Zocco also had a great game next to Blake and Will Hudson, converting a layup while being fouled with 51 seconds left to give Run TMC the lead for good. Goon Squad would have their chances to snatch the win, but Matt DelMonte and DJ Ellis both missed a three-pointer each in the final minute.

“As soon as I got to the line (in the final seconds), you can ask Kevin (Blake), I was like uh oh, I haven’t shot free throws all game,” Hudson said. “I missed that first one, and I thought I was going to miss that second one, but it fell.”

All-Star Will Hudson led all scorers with 28 points on 11-for-14 shooting. Hudson was feeling it from downtown, hitting 5-of-8 from behind the arc, while also grabbing ten rebounds. Kevin Blake and Matt Zocco finished with 17 and 16 points respectively.

Four players finished in double-figures for Goon Squad, led by All-Star Matt Marconi who scored 19. Marconi also had a double-double with ten rebounds. Ellis, DelMonte and Chris Folsom each contributed at least 11 points.

Goon Squad’s season comes to an end after the team’s second season definitely did not go as they had planned, or as many thought coming into the season. Finishing 4-5 and as the ten-seed was not the plan, as this team made it to the semifinals last season.

Run TMC advances to the round of eight to take on the second-seeded No Limit team who completed the regular season undefeated. These two teams met back in week 6, a game in which Run TMC led in the final minutes, but was unable to close out in regulation. No Limit won in overtime, 74-65.

Hudson says one thing his team did well in the first round is the key to being successful in the quarterfinals and throughout the playoffs.

“Rebounding,” Hudson said. “If we rebound, we should have no problem with John Rullan (and No Limit).”