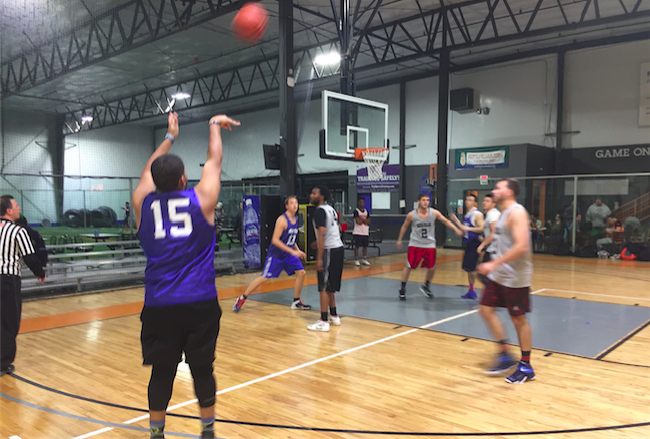 On night two of week three action in the Legacy Leagues, Will Hudson made it clear that he is a star in this league. His Run-TMC squad was able to come out victorious over a strong opponent in the Goon Squad, with a final score of 70-54.

Hudson led his team in scoring for the second straight game, and added seven boards as well. Run-TMC did exactly what they like to do which is wear teams down.

“[We just have to] box out and play defense…we preach it every day…get out and run.” Run TMC’s Will Hudson said.

Guard play from Matt Zocco was strong, scoring 23 points while going 7-for-14 from the field. Run TMC did a great job of taking the ball to the rack and knocking down open outside shots. They also benefited from a solid performance from versatile big man Kevin Blake who had 10 points on the night.

For Goon Squad, they were just never able to get into rhythm on the offensive end. Matt Marconi and Brandon Massaro led the Goons with 15 and 16 points respectively, while DJ Ellis put up 10 points to go along with 6 boards. You could tell early on Run-TMC wanted to prove they’re a serious contender in the league this season, and they definitely proved that tonight by beating The Weekly Rebound’s highest rated team.

“Defense leads to offense, and as you can see we [forced] a lot of turnovers tonight,” Hudson said.

On the other hand, Goon Squad is going to need more contributions from role players if they want to turn things around. The DelMonte brothers went a combined 0-for-8 from the field, which is not going to get the job done.

They need to rely less on the deep ball and work on getting points in the paint which was this team’s bread and butter in the Fall 2016 season. Next week Goon Squad will try and bounce back against Sportslook while Run TMC takes on the unbeaten Monstars.