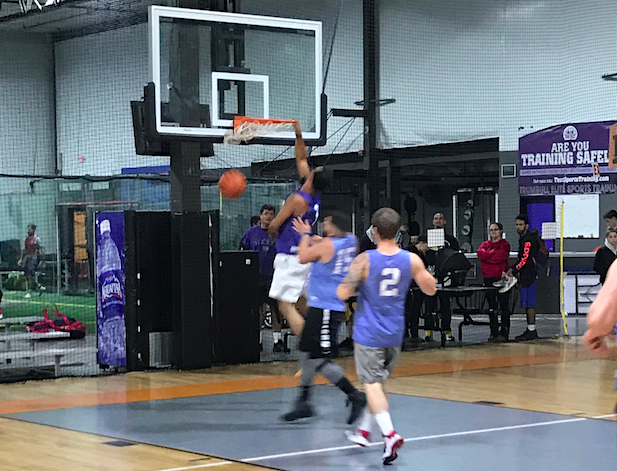 A game plagued by fouls, which saw one team shoot 14 more free throws, ended up as a 36-point blowout. Run TMC picked up their second win of the season over BS&B, 77-41, with balanced scoring and as some might say, a little help from the “guys in stripes.”

Having five players score between nine and 19 points is always a bonus, making it hard for the other team to key in on defense.  While Ty Alston led the way with 19 points, Run TMC’s new guard Reggie Stewart controlled the pace of the game, finishing with 16 points and eight boards.

Cody Dileonardo was the only player in double-figures for BS&B, connecting on 7-for-12 shots from the field. BS&B plays a hard-nosed brand of basketball, but it bit them on Tuesday night. They reached double-digits in turnovers and fouls by the end of the third quarter. Discipline will be key for them going forward.

BS&B has their work cut out for them as they take on the Temptations next week, who will be gunning for a win after a narrow loss to No Limit this week.

Since week 5, Run TMC has looked like a new team, picking up two decisive victories after starting the season with four losses. Run TMC will go for their third straight victory next week against No Limit’s three-headed-monster.

“I feel like we can take it all the way,” Run TMC’s Reggie Stewart said. “Defense and getting in their head was the key.”