Volpe returns as Duje’s Boys rumble past the Stampede 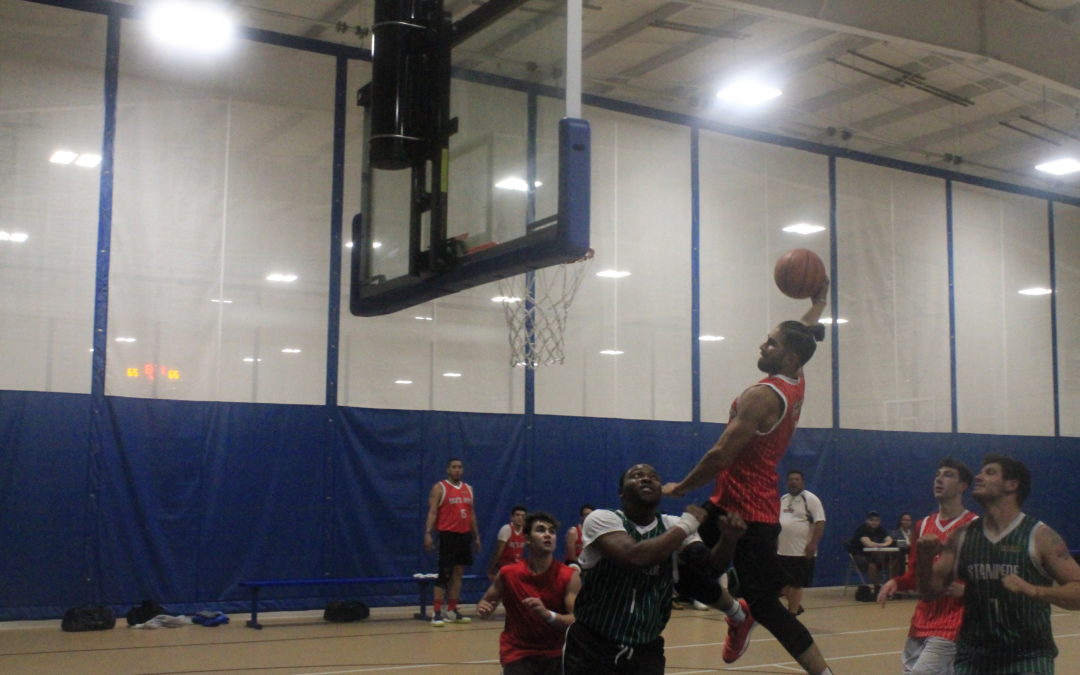 The battle between the sixth and seventh ranked teams in the Week 3 Power Rankings was sought to be a tightly-contested battle, but instead turned into a blowout with the Duje’s Boys running away with it, 76-40.

It was clear from tip that the Duje’s Boys gameplay was going to be get the ball and run.

“They were big and not really fast so it worked in our favor,” John Coutu said about the Stampede.

The Duje’s Boys played an exciting and confident brand of basketball all game, with many showtime dunks on the fast break. Vincent Volpe, John Coutu, and Zach Tartaglia combined for 53 of the team’s 76 points, most of which came by them blowing past the slower stampede and getting to the rim.

The Stampede was missing their best player, John Peterson, but it wouldn’t have mattered. The Duje’s Boys played a great team game from start to finish. Brad Allen played a strong game for the Stampede scoring 23 points and grabbing seven rebounds, but he had no help as the rest of his teammates combined for 17 points.

The return of Legacy Leagues rookie Vincent Volpe was a huge part of what made the Duje’s Boys look so sharp. He scored an easy 12 points, had six assists, and four steals to give them that extra piece that could make them an elite team.

Zach Tartaglia had a possible Player of the Week type performance, scoring 29 points on a perfect 14-of-14 shooting. Tartaglia has shown to be one of the leagues best players almost halfway through the season, and his 24.0 points a game is good for third in the league. Star point guard John Coutu has been dishing the ball around to all his teammates, as he sits fourth in the league with 4.3 assists a game.

The Duje’s Boys are coming into their own, after taking losses the first two weeks they’ve won back-to-back games with great performances.

“This is the first winning streak in this team’s franchise, so we’re feeling good about it,” Coutu added.

Next week Dujes Boys will be tested to the limit against the former champs in Lob City, and they’re feeling very confident, but not cocky.

“We are NOT guaranteeing a win, but we can guarantee that we’ll be competitive and won’t go away,” Coutu said.