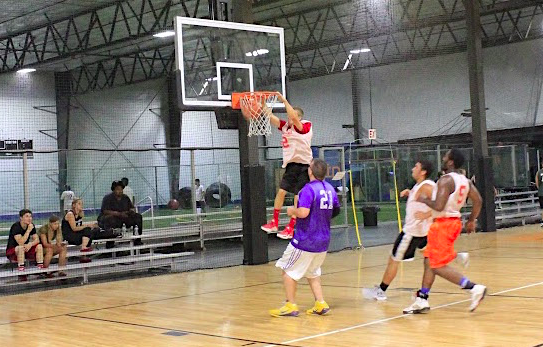 After taking a beatdown at the hands of Blood, Sweat and Beers in Week 7, Wake and Blake entered Week 8 with their remaining opponents a combined 1-13 on the season. On Tuesday, Wake and Blake let The Hateful 8 hang around until halftime, where it was only a three-point game.

In the second half, though, the team turned on its jets and blew past the last-place team in the Legacy Leagues, 71-39.

“We were just babysitting a little bit,” Wake and Blake’s Stephen Rohaly said. “We played them easy and then we turned up late.”

Wake and Blake held The Hateful 8 scoreless in the third quarter, and won the fourth quarter 28-12 to close out a win that brought the team up to .500 through eight games this season.

“We locked them up,” Wake and Blake’s Kevin Bott said.

Aaron Samuel and Gueber Docteur led the way for Wake and Blake (4-4) with 24 and 20 points, respectively. While the duo improved from a combined 35 points in Week 7, the team saw an even greater boost from its supporting cast.

The five players surrounding Samuel and Docteur scored 23 points on Tuesday night, compared to their 14-combined points on 6-for-27 shooting in their Week 7 loss.

The Hateful 8 (0-8), on the other hand, put up an identical total as they did in their Week 7 loss to And-1. The team seemed to keep momentum going from its closest game of the season by staying within three points of Wake and Blake going into the halftime break. However, the team did not score again until the fourth quarter, by which time a chance at its first win was out of reach.

The Hateful 8 will look to climb out of the bottom spot in the Legacy Leagues when they take on The Pandas (4-4) on Tuesday at 9:00 P.M. Jay Ramos, who finished with 9 points in the loss, says that his team’s record does not reflect its spirit.

“Confidence is key,” Ramos said. “We just want a win to get our momentum going into the playoffs.”

Meanwhile, Wake and Blake takes on And-1 at 10:00 P.M. on Tuesday in the last Legacy Leagues regular season game of this season. A win would put the team at 5-4 and give it a shot at the No. 4 seed in the playoffs.

While the team has run out of games to make a push at the top spot in the standings, there is no question that the team has its eyes on the league’s alpha dogs.