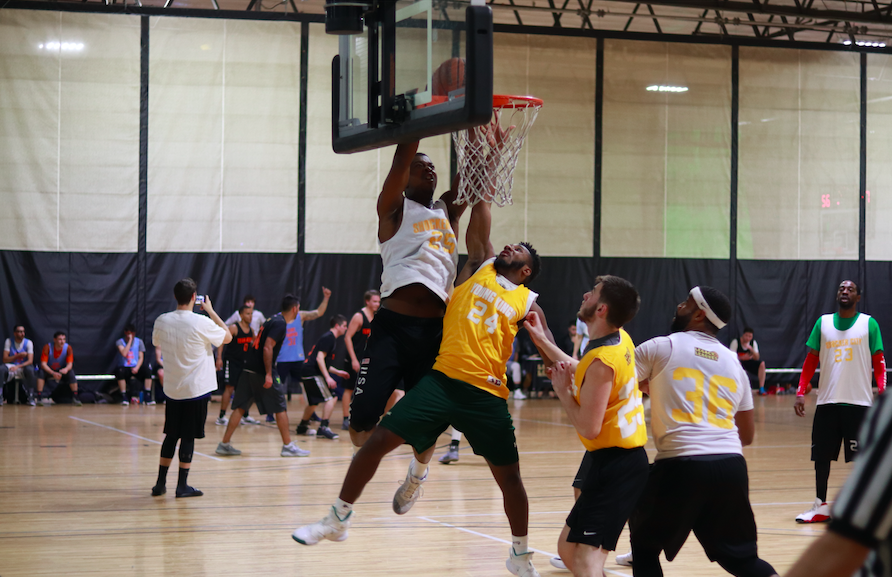 By Myer Segal | Photo Courtesy Jake Uquidi/Legacy Leagues
Two weeks into the season and Shocker City is still looking like champs, beating the Young Kings 98-85.
Shocker City went on a 15-0 run in the fourth, and took the life away from the Young Kings. Helping his squad tonight with their victory was Mike Davis, scoring 30 points with five assists.
Davis had a barrage of three pointers in the third, helping Shocker City maintain their lead over the Young Kings. Danny Lopez was a huge contributor on offense as well, scoring 16 points with eight rebounds.
Though the Young Kings lost, they battled back after being down 18 points after the opening quarter. They started second with a 16-4 run, and helping them do so was Destin Simmons- who knocked down four threes in a row. Simmons finished the game with 25 points and five rebounds.
Unfortunately, Simmons effort wasn’t enough, but the Young Kings could definitely be a team that could make some noise this season. Shocker City’s Davon Pratt, though victorious, was critical of his team’s second quarter play.
“We weren’t playing good enough because I wasn’t in the game,” Pratt said.
This could have been the reasoning to why they almost blew the lead, but Shocker City was successful anyway. They still have a long season ahead of them, and they look forward to playing all the teams. However, they do not fear the top.
“We want The Chasers and Run TMC,” Chris Rudzinski shouted after the game.
With this being said, The Chasers and Run TMC better be on their A-game from now on because The Shockers are the ones to beat. This season has only started and we have a lot to look forward to and games are only going to get more entertaining.