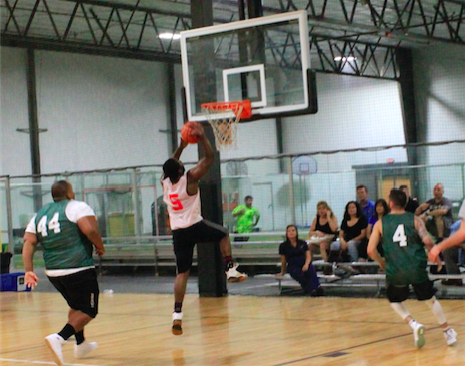 The Brotherhood dusted The Pandas, 134-59, on Tuesday night to remain the Legacy League’s only undefeated team. The team’s suffocating press forced The Pandas to get pick-pocketed 23 times, increasing The Brotherhood’s league-leading steals total to 82 on the season. Meanwhile, The Hateful 8 broke the 40-point mark for the first time all season in a 115-67 defeat at the hands of Run TMC.

Wake and Blake struggled to score in its Week 5 loss to ZewCrew, as the team fell below the .500 mark with a 55-42 loss. The Land, on the other hand, is riding a two-game winning streak after starting the season 0-3. However, The Land has beaten The Hateful 8 and And-1, teams that have a combined 0-10 record on the season.

The Pandas have struggled to assemble a full team for game days, as was the case in their Week 5 matchup against The Brotherhood. The Pandas started with three players, and the game was out of reach by the time a fourth player showed up late in the first quarter. Blood, Sweat and Beers had its best win of the season in Week 5 as they improved to 4-1 by knocking down undefeated Sportslook, 67-51.

Run TMC broke its three-game losing streak by walloping The Hateful 8, 115-67, in Week 5. Rob Koripsky and Matt Zocco each earned Week 5 Player of the Week nominations, as Koripsky scored 35 points while Zocco earned a triple-double. ZewCrew improved to 4-1 after defeating Wake and Blake, 55-42. Four ZewCrew players scored in double figures, as the team stayed within a game of The Brotherhood who is atop the Legacy League standings.

Sportslook took its first loss of the season as it fell to Blood, Sweat and Beers, 67-51, in Week 5. The team struggled to score, shooting 20-63 (31.7 FG%), and also dealt with foul trouble with just five players in uniform. And-1 lost its fifth-straight game in a 71-62 contest against The Land. The 62 points were a season-high for And-1, as it searches for its first victory.