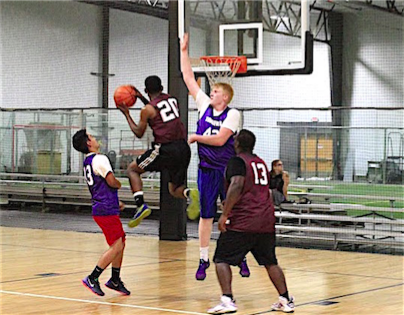 By Sam Leventhal and Max Molski

Both teams in this matchup are coming off of week six defeats; The Pandas to Blood, Sweat and Beers, and ZewCrew to Run TMC. The Pandas fought hard, but once again, could not field their full squad. Meanwhile, ZewCrew never even held a lead in their loss. Look to see what kind of damage these two squad can do, since they can be two of the strongest teams in the league.

BS&B has put on great performances throughout this season, as shown by their record, with their only loss coming at the hands of The Brotherhood. They will really be put to the test this week by a young Wake and Blake squad, who are coming off of a thrilling overtime victory against The Land.

The Brotherhood have been unstoppable this season. They lead the league in points, assists and steals, and are the only team that has still not suffered a single loss. Meanwhile, The Land are surviving on the production from Brett Cody and Alec Ward, who fell just short in their week six loss to Wake and Blake. The Land will be looking to make a big splash this week, hoping to hand The Brotherhood their first loss, but they will need to play some of the best basketball this league has seen to pull it off.

Week 6 pins the Legacy Leagues’ two winless teams against one another. And-1 has become more competitive with the addition of Aaron Smith in Week 5, but has not come up with any victories. The Hateful 8 has exceeded the 60-point mark in the last two weeks, but has surrendered 115 and 150 points to Run TMC and The Brotherhood, respectively, in that stretch.
Players to watch: Aaron Smith (And-1), Joey Marino (The Hateful 8)
Potential Breakout players: Santiago Mateo (And-1), Harrison Kessing (The Hateful 8)

Both Sportslook and Run TMC clamped down for defensive wins in Week 6, with Sportslook topping And-1, 65-55, and Run TMC beating ZewCrew, 52-41. Sportslook will seek to keep up with The Brotherhood in the league standings, with Bryan Acevedo leading the way. Run TMC, on the other hand, looks to climb over the .500 mark for the first time since Week 1.
Players to watch: Bryan Acevedo (Sportslook), Shaq Holman (Run TMC)
Potential Breakout players: Scott Christy (Sportslook), Kyle Murphy (Run TMC)