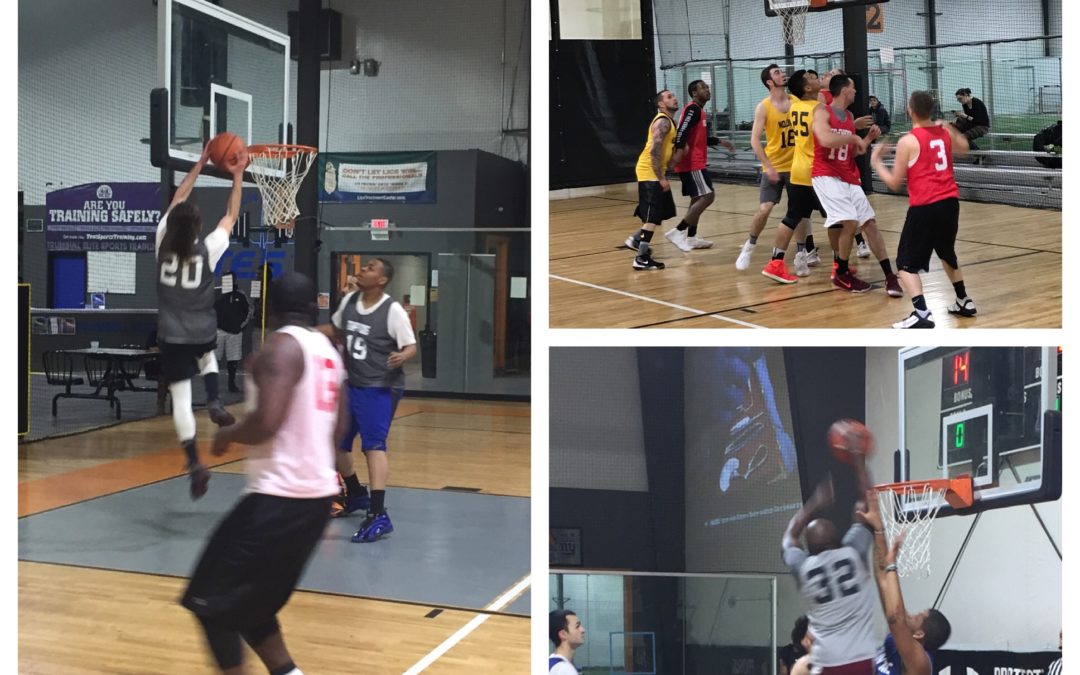 This week’s previews are presented by: East Coast Overhead Door

Weekly Rebound Podcast: Joe Catapano and Ryan Spitz recap a great slate of games from Week 8, and make picks for the final week of the Summer 17 season

STP took a break from the softer part of their schedule and received a rude awakening when they were flattened by Team Moose in Week 8. Meanwhile, Sportslook was without Bryan Acevedo last week, but luckily had a favorable matchup against Fry Time and pulled out a win. These two middle-of-the-pack teams will look to improve their seeding for the playoffs in what should be a tight game, but rebounding could be the difference. STP ranks fourth in the league in total rebounds, while Sportslook is second to last in that category. Sportslook will have to crash the glass and hope there is no rust on Acevedo in order to pull out a win.

This will be a battle of basement dwellers in the Legacy Leagues, as the two teams have combined for just one win. Bernard Brantley hasn’t been as much of a fixture as the Double Dribblers had hoped, so Jesse Doucette and Malik Colbert have had to try and shoulder the load on offense. Nobody has shouldered the offensive load for Fry Time, who are the lowest scoring team in the league. This could be a close game, but also very low scoring.

From a battle at the bottom to a clash at the top, the Monstars and Sensual Chocolate both find themselves in the top five of the final power rankings. The Monstars have yet to lose a game this season, but are running into a red-hot Sensual Chocolate team that has won six-straight. This game could easily turn into a shootout, as both teams can score the ball as well as anybody in the league. Nick Santorelli and his fantastic defense will be put to the test against the Langston brothers and the rest of the Monstars sharp shooters.

Over/under 50 points from Eric Singleton in this one? After giving up 129 points in Week 8 to the Flint Tropics, it is clear that Sometimes Y has a major defensive problem and is susceptible to blowouts. Even if Lob 203 doesn’t possess the same offensive caliber as the Tropics, Singleton alone could outscore the entire winless Sometimes Y team in this one.

The Throne will likely still be without Joe Baccielo for the regular season finale, and the team wants to prove their potency without their star player. They helped their case last week by taking down a solid Bad Boyz team in an overtime thriller. Meanwhile, The Brotherhood have lost two games in three weeks after not losing a game for over a calendar year. The Brotherhood press will be extra feisty in this matchup, as The Brotherhood will have an even bigger chip on their shoulder after another loss. The Throne will have to preach ball movement and ball security if they are to earn a signature win before the playoffs.

The Tropics could be in for some more smooth sailing after running Sometimes Y out of the building last week. Now they have the ability to feast on Flight Club‘s lack of size and put on another dunk show. Mike Bozzuto will likely be unstoppable in the paint once again, and who knows who will have the unexpected scoring outburst this week. In Week 8, it was Ryan Caggiano, who dropped 27 points after entering the game averaging under six points a game. Simply put, Flight Club is in trouble, no matter how many fans show up for them.

Once again shorthanded in Week 8, Goon Squad was able to pull out another win and continue to trend upward after a tough start to the season. Run TMC continues to improve themselves as they handled Stranger Danger this past week. John Rullan was battling an ailing wrist, but still managed to knock down a couple huge three-pointers to help seal the victory. If Goon Squad has Brandon Massaro back, we should have a very good game on our hands, and a great battle down low as Will Hudson and Matt Marconi will be fighting for boards.

Redemption looked much better in Week 8, as they fought a competitive battle against the Monstars and came up just short. It was an encouraging sign given their sloppy display the two weeks prior. Redemption could use a win going into the playoffs, but it will be awfully tough to accomplish as they face one of the league’s best in No Limit. Redemption faced the pesky Monstars defense who lead the league in steals, and now have to face the team that ranks just behind the Monstars in that category. No Limit leads the league outright in scoring, and they have a very solid chance to finish the regular season without a blemish.

Despite the absence of Chris Rosario, the Untouchabulls were able to pull out a much-needed win against Flight Club in Week 8. They will need every bit of Rosario on Monday against Team Moose, who boasts arguably the league’s best defense. Team Moose is coming off a lopsided victory against STP, and looks like a legitimate title contender with the arrival of Trevor Chaves. What’s even more impressive than their defense is their efficiency on offense. Despite having attempted the fewest shots in the league, they sit at 6-2 (with one loss being a forfeit that they didn’t show up for). All of that adds up to trouble for the Untouchabulls.

Both teams are coming off tough Week 8 losses, and both find themselves in the middle of the pack heading into the last game of the regular season. The Bad Boyz played a solid game against The Throne, but ran out of steam in overtime. Stranger Danger fell victim to their old nemesis (the turnover) in the fourth quarter of their loss to Run TMC. Both teams will be hungry to grab momentum heading into the playoffs, and need this win to try to snag a first round bye.