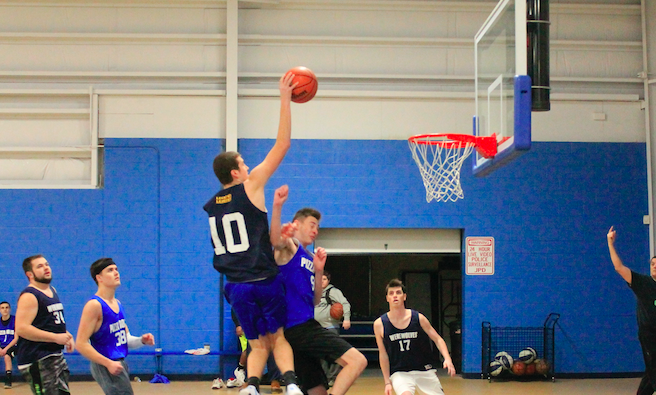 The Werewolves capitalize on a struggling Pizza Rolls team with a 74-57 blowout victory for their third win of the year.

Werewolves Brian Heston led the pack tonight with a monster game posting 18 Points, 15 Rebounds and 3 Assists. However, he wasn’t alone, teammate Gino Forte added 19 to lead the Werewolves in scoring on the night. This performance came at a crucial time, as the Werewolves look to climb the standings with just two weeks left until the playoffs.

The Pizza Rolls are still searching for their first win on the season but did have a few positive takeaways from tonights game. Rocco Lombardi and Zachary Dionizio combined for 46 points on 49 percent shooting.

With Wednesday nights win the Werewolves grab back-to-back wins for the first time all season. “It feels great, it really does,” said Conor Harrington, who did his part tonight by adding 15 points on 7-10 shooting. “I think we’re finally starting to get it together.”

The Werewolves came firing out of the gate jumping to an early 19-10 lead in the first and never looked back.

“We just wanted to keep our foot on the gas and keep going,” Harrington said. “We didn’t want to let up and lose, its happened before.”

Letting up wasn’t the case tonight as they held onto that nine point lead early and closed the game in dominating fashion. The Werewolves clicked on all cylinders tonight against a winless Pizza Rolls team. Next week won’t be a cake walk, as they ride their two game win streak and face the second place Halfway Crooks.

The Werewolves played well tonight and are going to have to perform at a higher level next week. “Just keep hustling and moving the ball.” Harrington said, “Communication is key.”