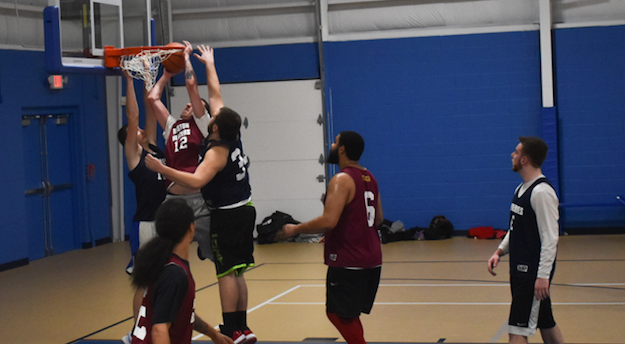 The Werewolves were hinting at something big on social media before their game yesterday. And big it was. Just a few minutes before tip-off, Dave Campbell walked into the gym after missing the last few weeks for college basketball.

His return was all the help they had needed. The Werewolves (2-4) won their first game since Week 1, and against the steaming Boston Blazers (3-3) too, coming off of three straight wins. Campbell had 16 points in his return, to go along with Gino Forte’s 21, as the Werewolves finished on top 59-47.

“These past couple weeks we had been forcing shots,” Forte said. “We kind of felt stuck when we didn’t have Dave on the court. This week, we started getting better shot selection and playing a lot better defense.”

The Boston Blazers fell behind by 11 at the half, but fought back late into the game. They brought the score within single digits in the fourth quarter before the Werewolves went on a run to end the game. Corey Strickland led the way for them with 14 points, while Robert Boynton followed with 12. Besides them, no player scored more than five points, but the rest of the team was still able to put up 21.

“They’re a good team,” Brian Heston said after his 12-point outing. “You can’t play around with a team like that because they’ll get back into a game. Gino hit a few huge threes. We played good defense, and we were able to get out in transition and work our offense that way.”

The highlight of the game was Forte’s performance from deep. He shot 54.5 percent, knocking down six threes of his seven made field goals. Although he only shot 46.7 percent from the field, he was the most efficient scorer that attempted more than two shots. It was his second 20-point performance in a row, with 26 last week against the Skyhookers, and Campbell’s return has boosted his confidence.

The Werewolves will look to keep their winning ways alive next week against the Alaskan Bull Worms (1-5). As for the Boston Blazers, they take on the winless Pizza Rolls (0-6) in their next matchup.